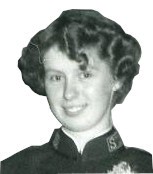 Barbara was so many things to so many people, it is difficult to put into words all that she was.  Born to Elias and Olive Burt (nee White) on August 8, 1935 at Humbermouth in Corner Brook, a place she considered home no matter how long she was away. She was often heard to state “Corner Brook is God’s country.”  She graduated from Corner Brook Public School, taking a job in accounting at the Co-op.   She fell in love with Chesley Kenneth Brown with whom she had a lifelong romance.  They married in 1955 and moved to Botwood where Chesley taught for several years. Their future plan was to move to St. John’s so that she could study to become a primary school teacher. Plans changed with the birth of their first of three children, and Barbara decided to devote herself to supporting her husband’s career and providing a warm refuge for family, friends, visitors, and students alike.

She was a life-long learner, taking a number of courses at MUN Extension.

She was a steadfast Salvationist.  She taught Sunday school and sang in the songsters. She believed hope and faith were the ropes of life, and she had a daily prayer practice.

“Each days holds the possibility of a miracle”  – Elizabeth Davis

“If there ever comes a day when we can’t be together, keep me in your heart I’ll stay there forever.”

Resting at Carnell’s Funeral Home, 329 Freshwater Road on Thursday, April 8 from 2 – 9 pm and Friday, April 9 from 11 am – 3 pm.   Funeral service will be held at the St. John’s Salvation Army Temple, Torbay Road on Saturday, April 10, 2021 at 11 am.  The Funeral Service will be live streamed and may be viewed online at this link:  https://www.facebook.com/SASTJohnsTemple/ .  Attendance at the Funeral Service by invitation only.  A further celebration of life gathering will be planned after restrictions are lifted.

Flowers gratefully accepted.  Donations in Barbara’s memory may be made to the Canadian Cancer Society or a medical charity of choice.

Attendance at Funeral - by Invitation only.
Service will be live streamed. Link:
https://www.facebook.com/SASTJohnsTemple/

Lois Lyndon Edward and families
Please accept my heartfelt condolences at this difficult time..I know my parents(Majors Ray/Joan Stratton)would want me to also express their sympathies .We have many happy memories of your Mom and Dad over the years. Know that your are in our thoughts and prayers at this time..
Paulette Roberts

T0 Lois,Lyndon, and Edward. So sorry to hear of your mother’s passing. She was indeed a beautiful person.. Kindest regards to you all at this time.

Our prayerful support and condolences as you experience this loss . We assure you of our thoughts and prayers as you celebrate her life with treasured memories.

To all Family members and particularly Manny and Brenda Burt
The news of your Barbara’s passing comes as quite a shock. We are so deeply saddened and sorry for your loss. Please accept our deepest condolences. Please know that our thoughts are with you all, as you journey through this very difficult time. Hopefully, as with all things the passing time will lessen the heart ache and ease the pain that you are suffering right now.
Regards
Tom and Joan Strickland

Deepest. Sympathy to all Barbara’s family..
I too grew up in Corner Brook, and was in Barbara’s class in school I remember her well.,,I once was flower girl with her at a wedding many years ago I too share her love for Corner Brook…
Marilyn Anthony Pike

Sincere condolences to the Brown family. Barbara sounded like a wonderful and giving woman who will be sorely missed.

Lois, Lyndon, Edward
Wonderful memories fill me when I think of your Mom but I cannot think of her without considering your whole family. When I took over the Cubs for the St. John’s Temple I don’t think I knew what I was in for. We became the go to for all kids in the area. It quickly grew to a 48 member pack. I had no leaders didn’t know where to get any, I don’t think I would have made it past the first 6 months. On the second week your Mom showed up and on third week Lois came and then we had Edward (Eddie) of course Lyndon had the Scouts. She had such a calming presence that the Cubs has a whole listened to and loved her. Years after leaving the Cubs I would still get former Cubs with whom I have had no contact with but remember the Cubs and all of the leaders as providing the only program in their lives outside of school. I don’t think you all realized the impact your family had on so many children’s lives. Your Mom was one great lady with a wonderful family to back her up. When we would meet we talked about those days and she and your Dad knew I was more than thankful for the help you all had given me and the influence you passed on to so many kids.. I know you are so proud to call her your Mom as I am to call her my friend..

Sincere sympathy is extended to the Brown family on the passing of Barbara Brown..I have fond rememberances of years past..

Lois, Lyndon, Edward and families
So sorry to hear of your mother’s passing. She certainly lived a life to be celebrated! Thoughts and prayers are with you all.
Donna & Derrick Hutchens

Sorry to hear of the passing of your loved one. She certainly was a beautiful Christian woman. You were blessed indeed to have her in your lives as we were blessed to have her as a member our congregation. Please be assured of our prayers and deepest sympathy at this time. God bless.

To the Brown and Burt families, so very sorry to hear of cousin Barbara’s passing ; may your beautiful memories sustain you at this trying time and know that she was sincerely loved , she will be missed by many . God bless you all.

To the Brown And Burt Families
Sincere condolences on the loss of Barbara. Our family connections spanned many years growing up in Corner Brook. What a loving ,kind and caring person that she was to all who came to know her. She will not be forgotten in the years ahead.
With the kindness of memories we say to the family, you were so blessed to have such a great person to love and honour.
With heart felt sympathy
Wilfred & Peggy Knee

We send our deepest sympathy to each one of you who were bereaved by Barbara’s Promotion to Glory. She was a dear life-long friend of ours and we will miss her. We have many wonderful memories of our adventures with Barbara and Ches. They were true friends and over the years we enjoyed fishing, hiking and going on picnics with them.
This is a difficult time for all of you as you say good-bye to this wonderful person. While we believe that “to be absent from the body is to be present with the Lord” we feel the pain of our separation from her and pray that God will comfort you as you grieve her loss.
Love & Prayers,
Jerry & Loretta

Edward, Margo and family,
Please accept our sincere condolences on the passing of Edward’s Mom. Thinking of you in thought and prayer!
Fred & Marian Hopkins

We were very sorry to hear of Mrs. Brown’s passing. As a young neighbor on O”Dea Place I fondly remember Mrs. Brown. She was very kind to a sometimes mischievous young man. I was reminded of who she was when I read the Telegram Obituaries to my Mother. We both remembered her to be a kind lady.

My sincere condolences to the family I have pleasant memories of her when I met with her husband Chesley at their home to discuss family history.

We were shocked and heartbroken to hear of Barbara’s passing. She was such a beautiful lady and always had a smile on her face. Our family loved her and Ches and please know that we are sending our love and prayers to you all during these difficult days.

We are sorry for your loss. Barbara was definitely a woman after God’s own heart. We have many cherished memories and are grateful that God placed her in our lives. God bless you and know that we are praying for you.

To Lois, Lyndon, Edward and all the Brown Family:

My thoughts are with you all during this time. Mrs. Brown was a wonderful lady – loved by all. She took such good care of Ches during his last days. They were certainly soul-makes. I have so many special memories that will always bring a smile. Trust that your memories will be bring comfort in the days to come.

It is with great sadness that we received the news of Barbara’s passing. We hold special memories of her kindness over the years we have known her. We send Condolences to her family and friends as they celebrate her life and remember the wonderful lady she was to them and others. May God comfort you all at this time. Gladys and Redvers Gosse

I miss you with all my heart.
“ Family is where life begins and love never ends. “
~ Barbara Anne “Mama” Brown
I love you and will never forget to make you happy and proud.
LOVE,
Your Baby Gran 👧🏼