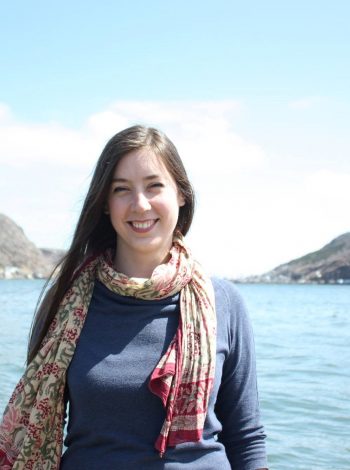 On July 18, 2017, Mary Florence MacDonald, 32, originally of Pictou, Nova Scotia passed away after a long illness in St. John’s, NL. Born in Truro, NS, September 10, 1984, Mary was loving daughter to Jim and Carol, thoughtful and kind sister to Andrew (Melissa) and Anna Kate (Colin), and fun and inspiring aunt to Rory, Myra, Grace, and Sadie. Mary is a graduate of Pictou Academy (2002) and Mount Allison University in Sackville, NB (BFA, 2006). After art gallery internships in both NB (Owens) and NS (Zwickers), Mary moved her life to Newfoundland and Labrador in 2008.
Mary was a pivotal community leader in Newfoundland and Labrador and an active member of the Atlantic Canadian arts community. Her friends and her artistic community considered themselves honoured and privileged that Mary made St. John’s her home.
Mary left Newfoundland for a short period to study in Toronto at OCAD, gaining a Curatorial MFA and specializing in rural art and community (2012). She returned to NL to be the Executive Director for Eastern Edge Gallery from 2012 to 2015. During this period Mary dauntlessly led over a hundred events, exhibitions, workshops, and summer festivals with local, national, and international artists. Mary’s dedication was recognized by ARTINFO listing her in Canada’s 30 Under 30. Many people, from all sectors, felt accepted, supported, and inspired within Eastern Edge under Mary’s Directorship and broad welcome.
From 2015 onwards, Mary pursued interests in Newfoundland identity, rural art practice and alternative locations for contemporary art through her writing and curatorial career. She was a freelance writer for The Overcast, The Rooms, Visual Arts News, C Magazine, CUSS and others. With warmth, positivity and her straightforward approach, she set the standard for community leadership and advocacy for the arts. Mary’s passions were broad, and her inclusive approach brought different communities together. She used her kick ass administrative skills to co-found Girls Rock NL, and assisted many other not-for-profits on various committees, panel discussions and projects. Mary was also a strong force in the establishment of Flotilla, an arts festival happening September 2017 in Prince Edward Island. Her love for cultural community has had an impact that runs far, wide and deep.
Mary’s legacy lives in the family she loved, friends she brought together, the communities she strengthened, and the art she made, inspired, and helped to be understood. She has set a standard for greatness that we can all follow.
The family want to extend a grateful thank you to the doctors and nurses at the Dr. H. Bliss Murphy Cancer Care Centre and the Dr. Leonard A. Miller Centre who, under the direction of Dr. Brent Tompkins and Dr. Cathy Popadiuk, treated Mary with kind and compassionate care. The family wish to thank the champions of Team Mary: Philippa Jones, Candace Fulford, Martin Poole, John Weber, and Jenina MacGillivray. These friends orchestrated a network of care and love that took care of Mary until and beyond her final moments. There will be a joyous celebration of Mary’s life in early September in St. John’s, NL.
In honour of Mary, contributions can be made to The Mary MacDonald Foundation, which will support independent curatorial projects. Cheques can be made out to Eastern Edge Gallery with notation that it is for the foundation. Online donations can made here: https://www.canadahelps.org/dn/6469.

My deep condolences to Mary’s family, friends and colleagues. A very great loss.

The MacDonald Family,
My heart broke learning of the passing of Mary. As a mother and sister I just cannot imagine the immenseness of your loss. I am thinking of your family and send my love to Carol and Anna Kate. Mary was a ray of sunshine. Much Love always, Christy Lynde Nicolucci

MacDonald Family,
So sorry for your loss. Our thought and prayers are with you at this time.

To Jim and Carol and family,
So sorry to hear about your loss. Our thoughts and prayers are with you at this time of sadness.

Anna Kate, Colin and Family,
My deepest love and condolences on the passing of your beautiful sister, Mary. The love you had for this incredible woman was ever visible when you spoke of her. She sounds truly remarkable and I wish I’d known her myself.
You are in my thoughts. I wish I was there to help during this difficult time.

Carol and family,
You are in my thoughts and prayers, may you find comfort in your memories.
My sincere sympathy,

Condolences to Mary’s family. I am deeply saddened by her passing. I met Mary briefly through Atlantic Artist Run Centre activities and she struck me as a most articulate, gentle and intelligent person. The arts community has lost a kind and fierce advocate, and the world in general needs more Marys. I hope our remembrance of Mary will keep her generous spirit with us to inspire and guide.

Although I never met Mary, i can see that she was a truly remarkable person. You must be so proud of the many gifts she gave. I know you will be holding your precious memories of her close to your hearts. Thinking of you with love.

Carol, Jim, and family,
You are in my heart and my thoughts. May you find solace in the love around you. My sincere sympathy.

Jim, Carol and family,
My heart breaks for you over the loss of Mary. I was so saddened to read of her passing. You are all in my thoughts and prayers.
Karri Ann

Heartfelt condolences to the family of an amazing young lady. God be with you all.

I knew Mary through friends and liked her right away. Not only was she bright and funny, she was so incredibly real and present and later I saw that she was like that with everyone. I will always remember the time she sat next to my parents at my best friend’s wedding. They didn’t know that many people there, including Mary. They raved about her afterwards saying how much they enjoyed her company. They thought she was a very special young lady. I couldn’t agree more and I am so sorry that we have lost her and her special light so soon.

We send our love and thoughts to Mary’s family and close friends. Mary was an amazing person — brilliant, funny and kind. From the first time we met her, when she was a student at Mount A, we recognized her big and beautiful heart. Although we didn’t see her often in the last few years, we loved running into her occasionally on our visits back east. We will treasure our memories of Mary.

So sorry for your families loss. She was a beautiful person

My heart aches. Mary brought joy to all……

So very sorry for the loss of such a beautiful person. How amazing to have had such an impact on her community at such a young age . Truly special.

It is with great difficulty that I try to find words that might send some love and support at this unimaginable time. Glad you can be together with family and surrounded by all of the friends and legacies left in Mary’s wake. I can only hope that the pride and joy you feel eases some of the grief now and in the days to come. Thinking of you all.