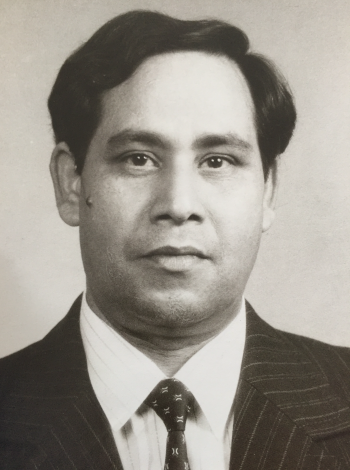 Professor Dr. Jagdish Narain Sharma, B.V. Sc & A.H. (D.V.M), M,Sc, Ph.D, D.Sc, F.C.P, F.I.Bio, F.S.B passed away peacefully on February 17, 2019. Born to Shri Hriday Narain Sharma and Shrimati Shahodra Devi Sharma on July 15, 1947 in Allahabad, India. He was the second of five children. Leaving to mourn with fond and loving memories of this immense loss is his loving wife of 55 years Sarojini Sharma: children: Preeti (Vijay), Jyoti (Minal), Hitesh (Michelle), and Neeti (Cory); grandchildren, Jayeti, Ilesh, Sahana, Aahva, Ketan, Raina and Miraya. Also left behind to mourn his great loss are his dear colleagues at the Department of Pharmacology and Therapeutics at Kuwait University where he was the founding chairman.

Dr. Sharma was recognized for his outstanding and highly accomplished professional achievements in research and his academic contributions in the medical sciences. He made significant scientific contributions through research publications and other scholarly activities such as presenting in national and international conferences; supervising graduate students and also serving as an editorial board member on several internationally reputed medical and biomedical journals. He was also author of two published research books. Besides his great academic achievements, he was best known to us for being the most loving and caring father and grandfather who always placed his family first. His dedication and love for his family was his driving force. His friends and colleagues regarded him as being a genuine, gentle, kind, honest and dedicated person. Dr Sharma was a real humanitarian and wanted good for all people.

Neeti and Family
Very sorry for your loss. It is a very difficult to lose the ones we hold so dear in our hearts. I pray that the memories of your father, husband and grandfather will always bring you comfort. May his soul Rest In Peace

We are so sorry for your loss. May you find peace in knowing that friends and family are thinking of you. Our deepest condolences.

Loosing a loved family member is such a tremendous loss. We wish to convey our deepest condolences to all the family and friends.

I would like to offer Prof Sharma’s family, his friends and colleagues my deepest and heartfelt condolences. Memories of good times are all we have to remember him with.
We pray for an eternal repose and tranquility for him and solace for his grieving family. May his soul rest in peace.

Jyoti , Mrs. Sharma and family
So sorry about Prof Sharma passing. Mom and I hope to see you, the baby and your mom soon.
Condolences to you all.

Jyoti and family
So sorry to hear about Mr. Sharma passing. Wanted to attend the funeral however I am not feeling well. Deepest sympathy to all.
Sincerely
Joyce Pye

My deep felt condolences to Prof Sharma’s family, friends and colleagues. His presence will surely be missed. May his soul rest in peace.

I am honored to have known your husband, father and grandfather Prof. Jagdish N. Sharma. Prayers and fond memories are what we have to remember of him. May my prayers ease you through this difficult time. My most heartfelt condolences.

Prof. Sharma will be greatly missed by his colleagues in the Faculty of Pharmacy, Kuwait University, Kuwait. Personally, his visits to my office and our cordial conversations will surely be missed. He was a caring colleague, and I am honored to have known and worked with him. My deepest condolences to his family and friends. May his gentle soul rest in peace.

Hitesh, Michelle,Mrs. Sharma.and Family.
We were sorry to hear of the passing of your father, father in-law, grandfather, and husband.
We are thinking of you and your family as you
go through this most difficult time. May the memories of your father and husband bring you
Comfort.

Hitesh and Family
Sorry to hear of your Dad passing away. Out thoughts and prayers are with you at this time.

So sorry to hear of Jagdish passing. Thoughts and prayers. For the family.

I wish to extend my deepest condolences to Prof. Sharma’s family and friends. I had the privilege to work by his side and his absence will be strongly felt by all of us at the Faculty; he will be missed. Wishing you strength and courage in these difficult times.

My sincere condolences to Prof Sharma’s family and friends. He was a supportive and honest teacher and colleague. His death was a big loss to our faculty in particular and to the whole Kuwait ?University. May his soul rest in peace and May God grant you and us the strength to stand this loss.

My heartfelt condolences to you and your family. We worked with Prof. Sharma for years at the Department of Pharmacology and Therapeutics, Kuwait University Faculty of Pharmacy, and his presence among us will surely be missed.
May his soul rest in peace and May God grant you the fortitude to bear this loss.

My deepest condolences to Prof Sharma’s friends and family. He will be greatly missed at the Faculty of Pharmacy, Kuwait University, by both faculty and students. May he rest in peace.

We send our deep condolences to his family. He will be missed!

I was honored to have known him. Please accept my sincere condolences.

Prof. Sharma was a great colleague at the Faculty of Pharmacy in Kuwait and we will miss him. My sincere condolences to his family and friends, hoping that the warm memories will help you go through these difficult moments.

Dearest Neeti , Cory and the entire Sharma family. We are wishing we could be there to comfort you at this difficult time. Losing a father is such an immense personal loss. we are thinking of you at this difficult time and are here for you. We are sending our deepest condolences to you, your siblings and your mom.
Love you and miss you so much
Esther Jack and the rest of your extended Toronto family

Please accept our sincere condolences to you and your families on the passing of your Father/Husband/Grandfather. Our thoughts and prayers are with all of you at this sad time. May all the happy times shared sustain you in the days ahead. With Sympathy, Patricia & Brian Oldford

Our heart felt condolences on loss of your father, grandfather and life time partner of Mrs. Sarojini. It was always a pleasure to talk to him. We pray his soul rests in eternal Peace and family get strength to bear the loss. His soul has moved in to the higher planes. 🕉🕉🕉

Dearest Jyoti and family
I didn’t have the opportunity to meet your Dad but I’ve heard you talk of him with such love and admiration. It is never easy losing someone you love and may the memories you have of him continue to fill your heart.
Treasure the stories, laughter and love you all shared together. Continue to talk about him for this will always keep his memory alive.
In the days ahead the blanket of grief will become less heavy but for now lean on each other for comfort and strength. I’m looking at his photo and you look so much like him Jyoti. This too will bring you comfort

Neeti, you and your family are in our hearts and minds at this difficult time. I hope you find solace in fond memories of your beloved father and grandfather. Much love from us!

Dr. Sharma was a distinguished academic. I met him during Neeti’s wedding time. He was a thorough gentleman and good soul. My deep respects and condolences.