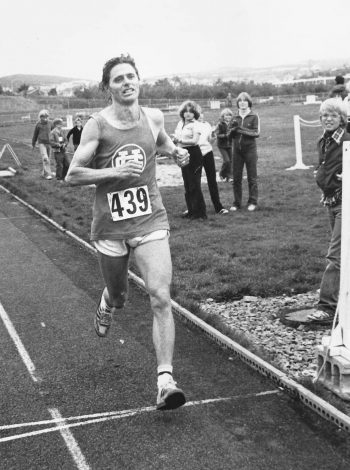 Born in London to Albert and Mary, Ray survived the Blitz. He spent part of his childhood in Pakistan, as his father worked for the British foreign office. While apprenticing at the Royal Small Arms factory in London, he met Delia while vacationing on a river boat in 1957. It was love at first sight and, after marrying and having the first three of six children, they emigrated to Canada – living in Montreal, Nova Scotia and Ontario, before settling in Newfoundland.

Ray was a fiercely competitive distance runner; his children would argue over taking ownership of his trophies in advance of him winning races. He applied his mentorship skills to coaching and took immense pride in guiding runners of all abilities. He wrote Canada’s official coaching manuals and travelled worldwide with elite athletes. He was a coach for Canada at the 1984 Olympic Games, and is a hall of fame member of both Sport NL and the Newfoundland and Labrador Athletics Association.

Although he was educated and worked for many years as an engineer, Ray was immensely creative; he was a delightful story teller and an artist at heart. He published cartoons, short stories, television scripts, radio plays, and even a book of humour. Ray was also a lover of music, especially opera. He and Delia went into business together with Delia Pewter, making bowls, jewelry and ornaments in their basement workshop, first in St. John’s and then in Portugal Cove-St. Philip’s.

Ray’s interests were innumerable, due his thirst for knowledge and an unquenchable curiosity. In life, he could never figure out the limits of our universe or the mysteries of existence. He is now free to search for answers.

A celebration of life event will be announced at a later date.

His family is forever grateful to the caring staff at Glenbrook Lodge and Cambridge Estates personal care home.

In lieu of flowers, please donate to Parkinson Canada or the Craft Council of Newfoundland & Labrador.

So sorry y for your loss. I would listen to his stories and be captivated by his knowledge and wisdom. I feel honoured to have the opportunity to know him and Delia. He was a very successful man but his family was his greatest achievement.

Such a loss of a true gentleman. It was truly a pleasure to work with Will. Our condolences go out to his loving family and friends..
Dean and Sherry

Dear Thi ,
I am so sorry to hear of your Father’s passing. What a beautiful obituary, may the memories of your Dad give you peace and comfort. I am sorry for your sadness as I know how special he was to you. Please know you are in my thoughts and prayers during this difficult time. Please accept my sincere condolences.

Stephen and family
I am very sorry to hear of your Dad’s passing. His obituary tells a colourful story, certainly one of a life well lived. I see where you and your siblings started your keen sport interests. Know he was proud and hold your favorite memories close always. In friendship Loretta ( Dawe) O’Brien

Dear Thi Phan,
So very sorry to hear of your Dad’s passing. The event is never easy no matter the age and especially when it’s a parent as they are special people – they are our guide, role model and greatest fan. May your fond memories of your Dad bring you comfort and keep him forever near – in time your tears will turn to a smile as you recall special moments and happy times spent with him. God Bless you and your family during this difficult time and always.

Thinking of you with heartfelt condolence.

Your colleague and friend,
Marina

Delia, Gavin, Nicola and Will Family,
So very sad to hear of Ray’s death. I remember him as a very kind, knowledgeable, witty man who was very well respected in the track and field community. but equally important as a devoted family man. I always enjoyed his conversations, and advice that he so willingly shared with all of us.
My deepest condolences to you all

I am very sorry to hear of Ray’s death. He was a wonderful man. As a running coach and friend he was extremely influential; developing very strong core of runners at the local, university, national and international levels. His kindness and friendship will be missed.
Warm Regards to all,
Peter Lewis

Gavin and family, so sorry to hear of your father’s passing.. We had great chats many times as he was out for his walk. Condolences to all.

Gavin and family, I was so very sorry to hear of your father’s passing. With sincere condolences

Gavin, Amanda, Nicola, Delia and family. I was saddened to read of Ray’s passing. I smile with many wonderful memories of Ray on the track, in road races and caching and encouraging many others. including me who started running in my mid 30s. I also intersected with Ray through engineering and I love our pieces of your parents’ pewter work. My condolences to you all

Gavin and Amanda, I am very sorry to learn of the passing of your father. Please accept my sincere condolences.

Dear Will family. We got to know Ray through the NL Parkinson dancing classes (which he loved) and then we often went together to the operas at the Avalon Mall. What a delightful man. We looked forward to his company, his stories and his broad interest in everything,. Our sincere sympathy to you all.

Dear Delia and family, my condolences to you all. Ray was always so interesting and interested in everything around him. He was not only curious about everything, he understood how things were made and how they worked. He was a great storyteller too, and it was such a pleasure to listen to his stories. Then came Delia Pewter, with Delia and they were at the top of the craft industry for years, in production and in their art. A life well lived, anchored by the love he had for Delia and the family.. Elsa

Gavin , Amanda and your family, our sincere condolences on the passing of your Dad. We understand how difficult this time of life is for you and your family and send prayers for you all and may your dad rest in peace.
Hugs from Trish and Bill.

A life so wonderfully lived. Sincere condolences to Delia and Mr. Will’s family.

So sad to hear this news today. I met Ray and Delia while tagging along with my dad, Gerry Russell, to road races many years ago. Then when I was in university, Ray took me under his wing to manage the MUN cross country team one year.. Such great memories! Thinking of you all and sending condolences from my mom and I.
Nancy Russell Corbett and Cynthia Russell

Stephen; Bonnie joins me in extending to you and your family our condolences as you gather to mark the passing of your Father.

Bill and I are so very sorry for this great loss of Ray. He was a devoted husband and father as well as a grandfather. We remember him dearly through his marathons with Bill. He was a great mentor to many who ran the Tely 10 and local marathons.
It was a pleasure to know him and your family.
God bless you all on your next journey! He will be in your hearts always!

Gavin,
So sorry to hear of your father’s passing. He sounds like a singular man: such a loss. Condolences to you and your family.

I have been thinking of you all since Lisa gave me the news yesterday morning. I have so many memories of Mr. Will, dad or Ray as I called him after I turned about 30. My fondest memories of him are sitting enjoying a meal together in the kitchen on Military Road after he would come up from the basement creating God knows what kind of work of art. I still have a pair of silver snake life earrings he crafted one Sunday in that basement that he decided they would suit me perfectly and gifted them to me. Sitting hearing his stories of life experience in that kitchen is imprinted on my brain and heart forever. I know I am not the only person he left that impression on. Thinking of each one of you especially his darling Delia.

Gavin and family,
So very sorry to hear of your dad’s passing. Our sincere condolences.