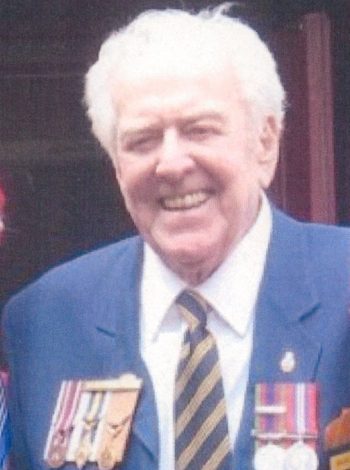 It is with great sadness we share the sudden passing of our father, Brian Wakely Edwards, one week before his 95th birthday. He is predeceased by his wife Florence of 64 years, 17 months previous. Leaving to mourn son David, daughter Judi (Dobbin), son-in-law Patrick, brother Dave (Nan-deceased), nieces, great nieces and nephews, cousins and many good friends and acquaintances. He is a decorated veteran of WWII after serving in the Royal Canadian Airforce. A tragic explosion in February 1944, hospitalizing him for 9 months in North Sydney, had serious repercussions on the quality of his mobility in his later years. But that is where he met his lovely bride Florence. After attending Dalhousie University and acquiring several degrees, he pursued a career with Procter and Gamble as Unit Manager for NL and moved to Corner Brook where he raised his family. He purchased a cabin on the shores of Deer Lake which he loved and spent every summer there into his eighties. He taught us how to chop wood, dig for worms, bait a hook, row a boat. He was an active member of the Playmakers and had many a good jig at the cabin with them. Later, when transferred to St. John’s, he belonged to the St. John’s Players, a barbershop quartet, the MUN Festival Choir and for many years, with the Singing Legionaries. He had a strong, beautiful tenor voice. He was a great story teller, a dancer, a fisherman, a sailor, a golfer, a bridge player, a singer, a devoted husband and father. As per his wishes, he spent his final years under his own roof. We gratefully acknowledge all of his caregivers, especially Nelsa, Kenny and Princess for their loving care and allowing him to remain in his own home until his illness. Following Dad’s wishes, there will be no visitation.  Funeral service will be held from St. Augustine’s Church, Westerland Road, on Monday, April 1st at 1:00 p.m.  Interment to follow in the Field of Honour at Mount Pleasant Cemetery.  We know he is dancing with Mom now.

Interment to follow in the Field of Honour at Mount Pleasant Cemetery.

David and Judi,
We are proud to say we have been friends with your Mom and Dad for more than 50 years. We have many fond memories of happy times with them, including our annual weekends at P&G get-togethers….Your Dad was the only streaker we have ever seen….in his boxers and tie…when streaking was the current rage.
And every year your Mom would write a poem about our weekends and read it the following year. They were loved by everyone. We enjoyed our many visits with them in NB, NS and NL., and since retirement our phone calls. May they Rest in Peace together and may precious memories always keep them close.
God Bless,
Dale & Muriel Hamilton.

Sincerest condolences to Brian’s family. I was a member of one of Florence’s writing groups and always enjoyed my visits to their home where we were graciously and hospitably welcomed.

Brian Edwards and his lovely wife Florence , were welcoming friends to us when we arrive from London, UK in the 1960’s and joined the St. John’s Players.
By then, Brian had already lived a full life as a decorated soldier, and a talented artist with Tom Cahill’s Corner Brook Playmakers.
Brian and Florence’s hospitality and friendship will always be remembered by us with love and affection.
Rest In Peace, Brian
From John and Magda Moyes

To David, Judi,Patrick, brother Dave and Family,
Please accept our sincere condolences on the passing of Brian. Our thoughts and prayers are with you at this time. Love Anthea and Michael

To Brian’s brother,, Dave
You are in our thoughts and prayers as you mourn the loss of your brother. Accept our sincerest condolences.
Susan and Jim Adams

My condolences to Brian’s family on his passing.
I enjoyed my visits with him and Florence over many years. He was a charming ,intelligent and interesting man.
I am grateful to have known him.

David, Judi and Pat, we were very sorry to hear of your Dad’s sudden passing. Sending hugs to you all and know that you are in our thoughts.
We bet he is dancing with your Mom right now.
Paul & Michelle Ryles

Brain was a wonderful friend and member of our Singing Legionnaires. He will be missed. Thanks Brian for all your service.