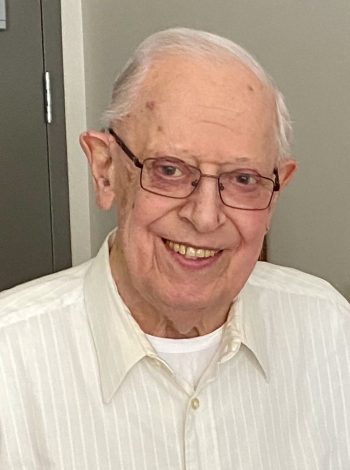 It is with great sadness we announce that David Gordon Jeans passed peacefully away Sunday morning, December 26, 2021, a few weeks short of his 90th birthday.

David was born on February 10, 1932, in St. John’s Newfoundland to Rendell Watson Jeans and Agnes Fedora (Templeman) Jeans, the youngest of their five children. He received a BSc at Memorial University in 1953 and a BEng (chemical engineering) at the Technical University of Nova Scotia in 1958. While living in Hamilton, Ontario and working at Procter & Gamble, he met his future wife, Marion Eleanor Chapple. They married February 27, 1965, in Stoney Creek, Ontario and after the birth of their first three children, David returned to Newfoundland with Marion and their family. Their fourth child was born in St. John’s.

David spent the last years of his working life with the Newfoundland Department of Environment. Once retired, he and Marion indulged in their passion for travelling and visited many places around the world, either on cruises or tours or visiting their expatriate children – Susanna in Germany, France and China and John in Brazil, Costa Rica and Australia.

David loved music and he loved to sing. The radio would be on all day from the moment he woke until he went to sleep. He was a member of the church choir at St. Mark’s Anglican Church and a member of the Anchormen Barbershop Chorus. He was a tireless volunteer for several organizations including the Canadian Diabetes Association for many years and served as president of the Newfoundland branch from 1996 to 1998.

David is survived by his wife of 56 years, Marion and his four children, Susanna (Carey), John (September), Kathryn (Scott) and Paul (Mary) as well as his two granddaughters in France (Catherine and Sara), his three grandchildren in Australia (Tara, Noah and Cadence), his brother-in-law Tom (Elizabeth) and several nieces and nephews. His parents, his brothers (Donald, H. John and Rendall) and sister (Flora), preceded him in death.

Due to COVID restrictions, the funeral will be by invitation only.

In lieu of flowers, donations can be made to the Canadian Diabetes Association or another charity of your choice.

Mrs. Jeans and Family, I was very sorry to hear of Mr. Jeans’ passing. I also worked with the Department of Environment. A few years ago I sat next to you at a concert at the Arts and Culture Centre where the Kitchen Party Group was playing. It was certainly nice to see and have a chat with you guys. God Bless.
Joan Healey

Marion and Family. Sorry to hear of Davids passing. Our friendship went back to early days at MUN, Halifax, Ontairo and back to St Johns. My condolences to you and family. Sincerely, Bob Andrews

Marion and family , I was saddened to hear of David’s passing. Over two decades he and I were often paired in multiple meetings with Newfoundland industry as we negotiated for pollution control, he for the province and I for the federal government. He was an honourable man of great integrity, humility, and kindness. I have very fond memories of those times and always considered him a friend as well as a colleague. My sincere condolences. Michael Guilcher

Marion and family.
My deepest sympathy and condolences on the passing of David as a father, and grand father. My thoughts and prayers are with you all during this time. He will be missed.

Dear Marion and loves ones, we are all saddened by the loss. We will miss David, his loving friendship, kind humour, cheerful humming and giant strides. He will remain in our hearts forever.

Marion and family we were so saddened to hear about David. We are sending love and prayers from out West. Sorry we can’t be with you during this difficult time. We will cherish all the wonderful memories of him.

Sorry to hear the news that Daivid has passed away my sympathy to Marion family and friends.Eternal rest grant unto him o Lord and may light perpetual shine upon him.May he rest in peace and rise in glory.

Marion and Family,
Sincerest sympathy on David’s passing. He was a good friend who went back with me many years. It was a pleasurer to call him friend and I will miss him.

So sorry to learn of your loss. We hope your wonderful memories will help sustain you all during this difficult time.

Marion & Family
so sorry to hear of David’s passing.
Deepest condolences to you and your family.
We will miss him singing in our choir at st mark;s.
Thinking of you all at this sad time.
Carol Arsenault

Dear Marion and family
Sending our deepest sympathies and condolences. David will be remembered as a kind gentle soul. Lives to hear him sing with the St Marks choir.
Thinking of you all
Kim Petley and family

David was a great volunteer with the Canadian Diabetes Association. Condolences to Marion and the Family.

We were saddened to hear of David’s. Please accept our deepest sympathies, we will keep you in our thoughts and prayers.

So sorry to hear about David’s passing. We knew him and Marion from St. Mark’s over the years as a gentle and special man. Condolences to the family.
Kevin and Kay Smith

Marion and family ,
Please accept our sincere condolences on David’s passing. Both of us have very fond memories of you and David in the years we were so involved with the Canadian Diabetes Association. We shared many a laugh over the years and I appreciated David being such a mentor to me when I first joined the Board in the early years of being a Diabetes Educator. May your memories sustain you as you navigate this sad time in your lives. Marilyn and David Rabbitts

Marion & Family,
We are indeed saddened to hear of David’s passing.. Have good memories of David in St. Mark’s Choir and we both enjoyed his pleasant personality. Our thoughts and prayers are with you all .
Jean & Eric.

Dear Marion,
So very sorry to learn of David’s passing. He will be missed by his church family at St.Mark’s. Our sincere condolences to you and your famIly..
Barbara Khan

Marion & Family:
Please accept my sincere condolences on the passing of David. You are in my thoughts & prayers during this very difficult time.

So very sorry to hear of David’s passing. My deepest condolences to all the family

Marion and family,
My sincere condolences for your loss. David’s life was indeed well lived. May you all be comforted by wonderful memories. We will miss him in choir.

Marion and family,
Please accept our sincere condolences. David and I joined St. Mark’s choir at the same time and I am honored to have known him for those years. His love of singing was evident as was his kind personality. He will be very missed.
Ruth Abraham and Dennis Peters

Marion and family. So sorry to hear of David’s passing. Our thoughts and prayers are with you all.

So sorry to learn of your loss. May the wonderful memories of your Dad help you through this most difficult time and in the days to come. I will keep you all in my thoughts and prayers.

With our deepest sympathy,,
Susan and Darrell Gover

Marion
It is never a perfect time to say good bye to those that we love but life is a gift and you and David shared that wonderful gift together. God Bless 🙏🏽🙏🏽

Marion and family,
So sorry and saddened to learn of Dave’s pass. Remember him well from early Memorial days. Always up beat and positive.. He will be miss but remembered by all who had the privilege of knowing him . We share in your loss.
Our deepest sympathy
Dorothy and Bob MacLeod

Kathryn, Marion and family
I was so saddened to hear of David’s passing. Even though I was only part of his care team for a short period, he took over some pretty special real estate in my heart. It was truly a pleasure to have cared for him.
May all your special memories help you get through the hard times..
Deanna Skinner

Marion and family
So sorry to hear of David’s passing.
As I look back on our time at the Department of Environment I realize that it was probably the most enjoyable time of my working career and of course David played a large role in that.
Ken

What a terrible loss for your family. I know how much he meant to all of you. I’m sending my love and support to each and every one of you, near and far. Take great refuge in the beautiful memories he has left.

Marian and family,
Gail and I are very saddened by the news of Dave’s passing. I thoroughly enjoyed and have great memories of working under Dave at the Provincial Environment Department. On occasions I walked with Dave around Quidi Vidi lake after we were both retired and was always amazed at how fast a pace he would set. He was a good boss in the 1970s and we always enjoyed a good laugh.
All our best,
Brian and Gail Power

To the family: my sincerest condolences to you on David’s passing. I was very fond of Mr. Jeans, as I would have called him, having worked with him for 14 years. I know he enjoyed travelling and am glad that you got to do so after his retirement. May the memories you have made be an everlasting reminder of the good times! My thoughts and prayers are with you all at this difficult and sad time.

We were saddened to learn of David’s passing. During my time with the Dept. of Environment he was my mentor and friend. May the memories soften your loss.
Randy and Jean Vallis

Marion & Family,
WOW ! We are so sorry to hear today of Dave’s illness and passing. He remains in our minds as a picture of good health — the longest of strides as he walked to work. We trust that great memories will help you at this difficult time. An environmental icon who brought to the Clean Air, Water, & Soil Authority a wealth of much-needed experience from his days in Hamilton & Long Harbour. A friend first, a wonderful colleague who impressed me greatly with his guidance and trust.
Carl (& Ella) Mount Pearl

Marion and family,
I am so sorry to hear of David’s passing. I have fond memories of his support and guidance – and humour. He freely gave so much of his time and wisdson to support the Canadian Diabetes Association. He will be sincerely missed by those who knew him. May all of your memories keep him in your heart.
Carol Ann Smith

Sending our deepest sympathy and condolences