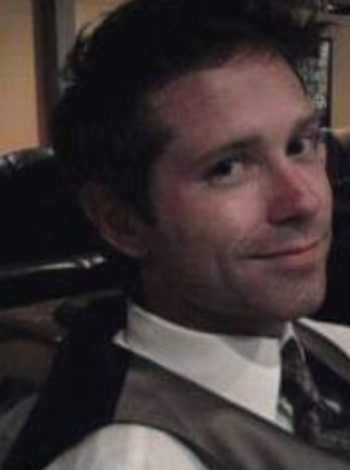 Leaving with stories that will be shared for years to come are his brothers from different mothers: Corey Reid, Matthew Reid, Matthew Murphy, Adam West, Matthew Puddester and Jeremy “Iggy” Rose.

Dave was an amazing father, son, brother, uncle and friend. He left a lasting impression with anyone who met him. He was a born preformer, with his countless impressions, quick wit, and story telling. He brought every word to life painting a vivid picture of the time had. He loved camping, fishing, skateboarding, and everything outdoors. Dave was always the funniest person in the room, always up for an adventure. If you needed a friend he’d be there, he just might be late. He loved growing his collections of everything from action figures, movie memorabilia, video games, all things macabre, and so much more. Dave’s biggest love in life was his daughter Lily. You saw this in how he talked about her, the photos and videos that he shared (with every conversation) would show you just how proud, and in love he was with her. To say he will be deeply missed is the biggest understatement.

Cremation has taken place and a private family inurnment will take place at a later date. He will be laid to rest with his Grandfather and Grandmother Pope as well as his Uncle Frank. In the coming weeks there will be a memorial bench placed at Mundy Pond skate park, a place he spent many memorable hours.

In lieu of flowers, donations can be made to a trust fund that has been set up for Lily. For more information, you can contact Alice at alice.power.ap@gmail.com

I cannot swim the ocean wide

And nor do I have wings to fly

Just light my way, when it’s my time

Cause there’s a new star in the sky

Sorry for your lost

Sorry for your loss

Dave was one of the funniest people I have met. Always guaranteed to make you laugh when you were around him.
Dave and Sarah were two of the first people I met when I moved from BC over 10 years ago and made me feel accepted.
I will truly miss him.

I am so sorry for your loss. Deepest condolences to David’s family. I taught him in Gr 4 and 5 at École St Gerard. He was a sweet boy who had a mischievous gleam in his eye. May your fondest memories bring you some comfort at this difficult time.

My sincere condolences to all who loved Dave, especially Lily and Sarah.
I didn’t know Dave well, but he was always so caring, considerate and genuine.
The world has lost a very special person.

I extend my sincere sympathies to Dave’s family and friends on their devastating loss, especially to Lily.
It was exactly 2 weeks ago that I heard from Dave, a text with a smiley face emoji, he was my tenant, but he was more than that, he was like family.
He was affectionately known as Downstairs Dave as my daughter lives upstairs with her Dave, we were all very fond of him.
I didn’t know him very long but I’m thankful for knowing him at all, in a world that can be not very nice these days, Dave was one of the good guys.
May he Rest In Peace. ????????

Alice and Steve we were sorry to hear of the passing
of your brother and brother-in-law.
We are thinking of you and your family as you go through this most difficult time may the memories of
David bring you comfort. We hope you feel all the love
surrounding you right now.

I’m so sorry for your loss. He will always be rembered for his love of Lilly and his great since of humor. He will be missed

Dear Catherine , l am so very saddened to read of the passing of your dear son . I offer you my sincere condolences . May God’s healing grace and love help guide you through these troublesome times . Every blessing to you and all your family

I am beyond heartbroken to hear of David’s passing. In a weird way, I’ve laughed SO much lately thinking of the wonderful way he had to light up any room he entered. Thank you for being a part of my life David, you have given me so very many beautiful memories to fill my heart. I will see you again sweet man. Xo

Shirley, Vince, Don, Des, and all the family, so sorry to hear of the loss of your step brother. I never met him but sounds like he was a likeable guy. Sending heartfelt condolences to you all.

Catherine, Alice, and the Walsh. Family, there are no words to express my sorry for Your loss,. I can only say that of all the children Allison started school with David was my favourite, the one I will never forget. David was such a sweet little boy with a sense of humour way beyond his years, always clowning around and making all the kids laugh, which seems to have followed him into adulthood , I hope all the love expressed for David from his many friends will bring You comfort, and peace in this time is great loss. I hope Lilly will find comfort as she grows older in all the people who loved her Dad as much as he loved Her.
With Deepest Sympathy and Love .
Geri Oliver and Family

I’m so sorry for your loss. I my thoughts and prayers are with all who knew and loved him.

Sincerest condolences to you Alice, your mom and your family on David’s passing. May your precious memories help you through this most difficult time.
May his sweet soul Rest In Peace.