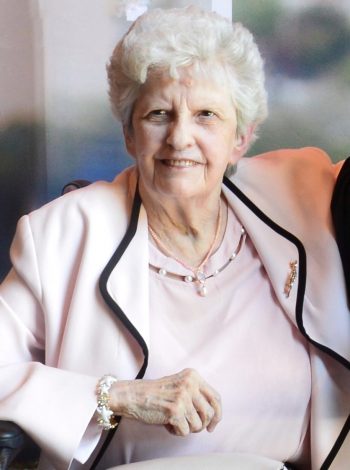 To view the online service from the Carnell Memorial Chapel for the late Estelle (Stella) Marie Power on Thursday, October 8th, 2020 at 4:00 pm please click on the link below:

It is with heavy hearts that we announce the passing of our mother, mother-in-law, and grandmother, Estelle (Stella) Marie Power (nee Chafe), age 86 years. Stella slipped away peacefully in the presence of her two grandchildren, Stephanie and Riley on May 26, 2020 at North Pond Manor in Torbay. She is predeceased by her loving husband, Robert (Bob), Sr. and her son, Robert, Jr.; her parents: William and Mary Chafe; brothers: Frank (Eleanor), Fons (Barbara), and John Chafe; mother and father-in-law: Brendan and Mabel Power I ; sister-in-law, Catherine Sandeman (Sandy) and brother-in-law, Brendan Power II; nephew, Brendan Power III; and her dear friend, Jean Dyer, who, as described by Stella’s grandson, “breathed new life into Nan” after she moved into North Pond in 2015.

Leaving to mourn is her daughter, Alice Hunt (Wilson) as well as her grandchildren: Ashley, Stephanie, and Riley. Also, deeply grieving her passing are her sister, Sr. Loretta Chafe, RSM and her brother, Ron Chafe (Eleanor); sisters-in-law, Rosalind (Wayne) Smith, Daphne Chafe, Betty Perry and Janet Power as well as a large circle of extended family and friends.

Stella was a devoted wife to her loving husband, Bob, and an adoring mother to her children. She always made her family the highest priority in her life, loving and caring deeply with all her heart. During the past 27 years of her life, her grandchildren became the focus of her world. There was nothing that she enjoyed more than family gatherings with Ashley, Stephanie, and Riley, especially when those get-togethers included the special people in their lives: Mark MacLellan, Kélé  Miguel, and Katie Gaulton. Recently, since Ashley moved to Alberta, she looked forward to every opportunity to FaceTime with her. Her grandchildren will always remember their grandmother as generous and kind-hearted as well as loving endlessly and unconditionally. In addition to her close family members, extended family and friends will never forget how Stella always made everyone feel welcome and gave them “the royal treatment” when they visited her home in Grand Falls or St. John’s.

Special thanks are extended to Lolly Noseworthy and her amazing staff at North Pond Manor in Torbay where Stella resided for the last five and a half years. Their commitment to providing a loving and caring home for her during these years was beyond measure. In the last couple of months, after she became ill, they provided tender and compassionate care that was above and beyond the call of duty, ensuring that she was always comfortable and that all her needs were met. The family would also like to express their gratitude to Dr. Laurie who provided her with the best of care within the last two years as well as invaluable support and guidance to the family in recent weeks.

Stella has now joined Bob, her husband of 43 years, and her son, Robert, in eternal peace and happiness.

Memorial donations may be made to a charity of one’s choice.

Remembering your mom and our childhood days and honoured to share this day with you as you lay your precious mom to rest until you meet again.

I will always remember mom telling me when she was pregnant that I wanted a baby sister and her called after you, Alice. Although time as taken us to different paths, I look forward to seeing you today to reminisce about your beautiful mom and of time that has passed us by. My deepest sympathy to you and to the family..

Alice and all the family,
We were saddened to hear of Stella’s passing. Our family has so many wonderful memories of happy times in Grand Falls-Windsor with your family and especially with Robert.
Please accept our sincere condolences.
The Duncan Family

Alice & family. Just now saw Stella’s notice. I am so sorry. She and Bob were so much a part of our lives for so many years. It’s like yesterday I was with her the day you were born. I will never forget how happy she was. She and your father were amazing people. Mom loved them both and you of course shoved to see you coming to visit and we all made many visits to Grand Falls to visit you and were always so welcomed. Take care and much love .Lenora Dave & family.

Alice and Family,
Please accept our sincere condolences on the passing of your dear Mother, Mother-in-Law and Grandmother, Stella. I remember her most when she and Bob visited our country place in Middle Pond Hollow. Mother always had a cup of tea and other treats on hand to serve and many stories and laughs were shared around our table. We visited Bob and Stella several times in their home in Grand Falls and of course were given the Royal treatment., complete with a trip to the falls in Grand Falls. She will be sorely missed by us and by all of our family.

Pat and I extend our condolences at your Mom’s passing. My memories of your Mom are associated with her visits with your Dad to Tors Cove to visit the Power clan, especially my grandmother, your Dad’s Aunt Mary. I remember your Mom as always a warm, kind, and gentle person. Deepest sympathies!

Alice and Family,
Please accept our sincere condolences on the passing of your Mom.. She will be missed. Many happy memories were had with your Mom, Dad and family. Please know that you are in our thoughts and prayers at this sad time.

Dear Alice and family,
Please accept our sincere condolences on the passing of Stella. She was a beautiful lady. I have so many memories of her from my childhood. No family trip across the island was complete without a stop in Grand Falls to visit!! I especially remember the year (1980, I think) when we all took a vacation together in the Codroy Valley – many good times had by all. I take comfort in knowing that she is now reunited in heaven with Bob and Robert. Sending lots of love to all of you during this sad time.

Alice and family,
Sorry to hear of the loss of your mom. She was a lovely lady. I have many fond memories of her(and your family) growing up. May she Rest In Peace…..

To Alice and Family
My sincere condolences to you and your family. Your mother was a very special lady and was very proud of her Grandchildren as she mentioned them many times in my visits with her. Thinking of you at this difficult time and sending love and prayers.
Fred White and Family

To Alice and Family,
My sincere condolences to you and your family. She brought a light to this world which will remain through her sister, her children and grandchildren. Deepest sympathies..

To Alice and Wilson
Ashley, Stephanie, and Riley
and Sr Loretta.

I am heavy with sadness upon hearing of the passing of dear Estelle. Thinking of you at this difficult time and sending love and prayers.

My beautiful cousin Alice, I am so sorry about the passing of your Mom. Stella was so kind and welcoming to me when I lived with her, your Dad and Robert for a brief time as a nursing student. Many nighttime chats and cups of tea were shared and I dearly love her and the whole family.

We are so sorry to hear about the passing of your Mom, Alice.
Aunt Stella was always such a sweet kind lady to everyone around. And she will be sadly missed by all of the family. Hugs and prayers to all!
Love
Tina, Mike, Elizabeth and Victoria Philpott

Alice and family.
Just heard of your mom’s passing. Please know I am so very sorry for your loss. Her obituary was lovely. It seems obvious that you must turn after your mother considering you are also so generous and kind-hearted. You all must be devastated. I am thinking you at this difficult time.

So sorry to hear of the loss of Stella. She will be missed. Sending virtual hugs to all.

So sorry for your loss Alice. Thinking of you and your family during this difficult time.

So sorry for your loss. She was such a beautiful lady and we had so many laughs together. Rest in peace my friend.