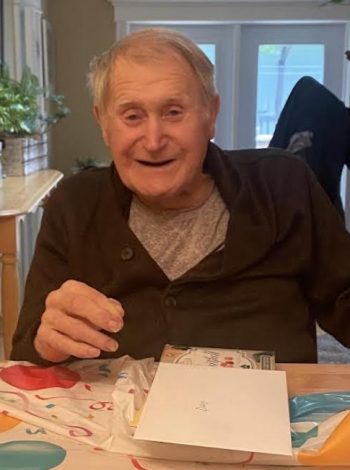 Predeceased by his wife, Florence (Chaulk) in 2012, as well as his brothers Arthur, Albert and Harrison, and his sister Margaret.

Allister was a World War 2 veteran of the Merchant Navy, as well as a highly skilled machinist and mechanic who could fix pretty much anything. He had a lengthy career with the former CN Railway and Dockyard, the latter from which he retired in 1988. After retirement, Allister spent a number of years caring for his wife Florence during her illness. In his active social life, he was a long-time member of the Royal Canadian Legion and the Benevolent Irish Society, where he had a large circle of friends and was known to love to dance. He was also a very good singer who expressed himself as a member of the “Singing Legionnaires”, in which he enthusiastically participated for several decades. Allister moved out of his family home in 2020 at the height of the Covid-19 pandemic.

Thanks to the staff of the CMVP for the excellent care they have provided since that time, and thanks also to his physician, Dr. Michelle Levy. Thanks to Dr. Kathy Crewe for her exceptional care over the years. Allister was a kind and generous man who dearly loved and cared for his family. He will be greatly missed.

Sorry to hear of Allister’s passing. Please accept our condolences.

To the Downton family sorry to hear of Allister passing I worked with Allister for many years,he was a very nice mam.RIP Allister. Darwin &Rose White

My sincerest condolences to the Downton family. Al was a remarkable, kind, humble, and gentle man whom i was lucky to know. I always had the greatest respect and admiration for Al that started when i was just a kid in the neighborhood where he was known as the man who could build anything, fix anything, and was always the first one they’re to lend a hand. In later years I cherished our chats and Al’s insights shared over macaroni and cheese. I missed seeing him and thought of him often when i moved away from the neighborhood and didn’t get to see him nearly as often as I would have liked. Rest easy Al

Our condolences to the family. Rest In Peace Allister

To The Downton Family,

I’m so sorry to hear of your dad’s passing. I knew him through the Benevolent Irish Society dinners and dances. I even had the great pleasure of having a few dances with him. He was such a sweet man.

To the Downton Family

Sorry to hear of your Dad passing. I meet your dad at the Legion and city hall functions with his sister June. He was very nice man and loved to dance. He will be missed.

TO: THE DOWNTON FAMILY

SO SORRY TO LEARN OF THE PASSING OF YOUR DEAR DAD. DID NOT KNOW YOUR MOM HAD PASSED SOME YEARS AGO. OUR SINCERE CONDOLENCES TO YOUR FAMILY AT THIS TIME. PRAYING FOR GOD’S COMFORT THROUGH YOUR JOURNEY OF GRIEF.

Lynn ,Gary and Family, so very sorry for your loss at this time ,prayers and thoughts are with you at this very hard time,

To the Downton family,
Your Dad was a gentle soul who enjoyed life to the fullest! In my years of knowing him from the Benevolent Irish Society, he attended many events and participated with vigor. He loved to dance and never got off the floor. What I remember most about him was his kindness and his attitude; always happy and kind.
May he Rest In Peace.

Sorry to hear of your loss. Thoughts and prayers are with you…..Hold your precious memories close.

To the Downton Family:
I would like to pass on my condolence for the loss of your dad.. Growing up in the neighborhood I have many Memories of the Downton family. I played with Ken and Ann on Forbes St until I left and joined the Army.. Cherish your memories and Al from one Vet to another Lest We Forget

Chris and family.Sending my sincere sympathy to you and your family at this sad time.

To the Downton Family: I first met Allister at the cardiac rehab program at MUN and we would walk around the track at the fieldhouse. He was a sweet and gentle man and loved being part of the group. I then met him at a few fundraisers for the Singing Legionnaires and he put his heart and soul into every song.
Rest in Peace Allister and my sincere condolences to all his family and friends and to the comrades in the Singing Legionnaires.

To John and Gigi and all the Downton Family Liam and I would Like to express our deep condolences on the loss of your loved one ,You are all in our prayers ,
Liam and Bridie Sneyd

We were sorry to hear of Allister’s passing. Our deepest condolences go to the Downton family at this sad time. Take care.

Lynn, so sorry to hear of your father’s passing. My thoughts and prayers are with you at this difficult time.. I know how close you were to him and how much you cared for him.

so sorry to hear of mr downtons passing. he was
such a kind and polite gentleman and a wealth of
hnowledge and skills. many fond memories of
forbes street and all the family.

I am very sorry for your loss, i knew Allister from the B.I.S. and once again Thank You for your servive.

My condolences to Your family.

Lynn and Gary , sorry for your loss, thoughts and prayers are with you. Glenn and Lorie Noseworthy

My sincerest condolences to the Downton family on the passing of Allister who was a very remarkable man whom I got to know through Cardiac Rehab programme. His determination of living life to the fullest was a good example to all of us and I certainly will miss times we spent together.. Rest In Peace precious man.

Uncle Al was an exceptional human being and will be greatly missed. Thinking of you all.

What can I say about Allister , what a remarkable man, he joined the Newfoundland Cardiac Rehabilitation Association group many years ago, and was a devoted member.
Friends in the group picked him up in the early morning to take him to class, he never missed a morning.
In later years, his movements kept him at home until he went to DVA.
A wonderful life for a wonderful Man , Rest In Peace my friend.

To the Downton family please accept our sincere condolences on the passing of Allister. We knew him from the cardio program..Francis & Elizabeth Keating.

Rest easy Allister we have the watch.

Our sincere condolences to Chris and Pat and your family on the passing of your Dad.
What a treasure to have him for so long.
Love and our sincere wishes Trish and Bill Dodd.

A true VETERAN. Rest easy Mr. Downton, you have earned your place in Heaven. LEST WE FORGET.

To the families of Allister ,
Please except my deepest condolences and sympathy on the loss of this beautiful soul. He was a sweetheart and had the kindest heart. May he Rest In Peace

I met Mr Downton through the cardiac rehab program and thoroughly enjoyed many conversations with him both there and on the telephone. Sincere condolences to the family. RIP Mr Downton.