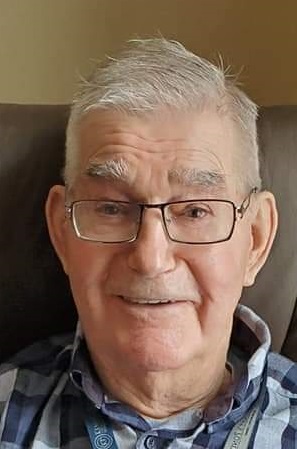 It is with heartbreaking sadness that the family of Gerald Skanes announces his passing on Monday, March 14, 2022 at the Health Science Centre, at the age of 92.

Gerald will be lovingly remembered by his two daughters Donna O’Driscoll and Beverley Leloche-Skanes (Cheikh); and daughter-in-law Kimberley Spurrell Skanes.

Cremation has taken place. Visitation will take place at Carnell’s Funeral Home, 329 Freshwater Road, St. John’s on Friday, March 18th from 7 to 9 pm and Saturday, March 19th from 2 to 4 pm and 7 to 9 pm. The funeral service will take place on Monday, March 21st, 2022 at 2 p.m. from The Carnell Memorial Chapel. Interment will follow at the Anglican Cemetery on Forest Road.

Out of respect for the elderly and immune compromised that will be in attendance, the family asks that you wear a mask at all times when attending the visitation and chapel for Gerald’s services.

As an expression of sympathy, flowers are gratefully accepted or donations in Gerald’s name may be made to a charity of one’s choice.

My sincere condolences on the passing of your dad..

Bev and family,
Sorry to hear your Dad passed away. Our thoughts are with all of you at this difficult time.

Bev,
I am so sorry for your loss. How I wish I had known your Dad was at Kenny’s Pond, having spent a lot of time there in recent years with my mother.
With love and many happy memories,
Aileen and family
Montreal

To, Donna,Beverley and Kimberley and family,
We were so sorry to hear of your Dad’s, Father in-laws and grandfathers passing.
It was just weeks ago your Dadcalled my Mom , Rhoda Pike, on the passing of our Dad, Frank Pike. Mom was so touched by his call. That phone call from your Dad brought back lovely memories to Mom from the Pike/Skanes get together’s of the past.
We know it’s a sad time right now, but may your happy memories bring you comfort.

The Skanes family
My condolences on Gerry’s passing. He was my supervisor at Memorial, and I remember him as a kind and generous man with a great laugh

Dear Bev and Donna,
So Sorry to hear of your Dad’s passing. Your Mom and Dad were our lifelong friends and we will always fondly remember the pleasant times we all spent in Topsail and the summer cabins. God Bless you and all the family.
Peg and John Marshall
Halifax

Our condolences of the passing of your Dad, Gerry. I came to know Gerry during his career at MUN. He was so pleasant and delightful to chat with and always had a smile.. You are in our thoughts and prayers. at this difficult time.

Donna and family. So sorry to hear
about your Dads passing. Gerry was my first supervisor at the Tech Services Computer shop.. He retired alittle while after I got there. We joked about that me causing him to retire. I remember his laugh .He lived a long life after
retirement. So glad for that.

Donna & family,
So very sorry to learn of your loss.
Sending you a big virtual hug,
Janice Parsons

To Beverly and Kim, please accept my condolences on the loss of your loved one.

My condolences on the passing of your father. You are in our thoughts and prayers.

To Bev and Donna my deepest condolence on the loss of your father as well as to Kim on the loss of your father in law and to all the grandchildren and great grandchildren your loss as well. When I first met Mr. Skanes many years ago I was impressed by what a kind and gentle soul he was. Over the years that impression never changed. I hope your many happy memories of him bring you comfort during this difficult time. May He Rest in Peace.

You will be greatly missed. I enjoyed very minute spent with you looking at pictures and every call taking your orders

To the Skanes family, We were saddened to hear of Gerry’s passing. Though we hadn’t seen each other for quite some time, we had many years of fun and great memories. Rest In Peace Gerry.

Skanes family, Please accept our condolences on Gerry’s passing. He was certainly a kind, gentle soul who will be greatly missed.

sincere sympathy Graham on the passing of your brother. regards to you and family

Bev, my thoughts and prayers are with you and your family at this difficult time. Cherish your wonderful memories.

To my Uncle Gerry’s daughters, Donna and Beverley, as well as all the other family members I send you my deepest and saddest regrets.. I know how much he will be missed but take solace in all the beautiful memories he left you with. Our thoughts and prayers are with you all at this very sad and difficult time. I will always fondly remember the handsome, kind and special gentleman Uncle Gerry was.
Love and prayers to all,
Vivian and Don Hollett

Bev and family please accept my sincere
condolences on the passing of your dear father.
Keep his memory in your hearts and he will be
with you forever. ✝✝