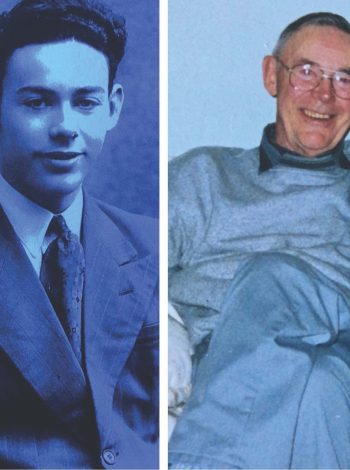 Otto was a gentleman and a kind soul. He was a man of great integrity and could always becounted on by those who were fortunate to know him. He was a respected member of his community and a Principal and Teacher to thousands of students throughout his career. He took great pride in all that he accomplished throughout his life. He never gave up his beloved hobbies of fishing, hunting and “strolls in over the hills”. His greatest pride was his family whom he loved with all his heart. There will be a gathering of family and close friends to say good bye at 11:00 am on Saturday, August 24th, 2019 at the Carnell Memorial Chapel, 329 Freshwater Road.  A memorial service will be announced at a future time to celebrate Otto’s life at his hometown in Fortune Bay.

So very sorry to hear of Mr. Fianders passing. Sincere condolences to all.

To the Fiander family and Winnie, sorry to hear of Otto’s passing. I had the privilege of teaching at Fitzgerald High while he was my principal. A kind,, soft-spoken man of high principles. Have enjoyed meeting him several times over the years since. Blessings on you all as you celebrate his life.
Eric and Marion Hillier

So Very Sorry for your loss, our thoughts and prayers are with the family.

To the extended Fiander Family we offer our condolences on the passing of their touchstone, Otto.

So sad to hear of Mr. Fiander’s passing. I have many memories of him as a close friend of my father’s and as my teacher and principal. In the past number of years I loved meeting him in the store and sharing our memories of the past. My sympathy to his family and especially to Winnie.

Pearland Brenda,My condolences to you and your family on the passing of your dad.I am deeply honored and blessed to have had such a wonderful man as my first principal and mentor at Fitzgerald High School in English Hr. West.Please know that you are in our thoughts and prayers.Ralph and Brenda Mullins.

Pearl,Brenda and family: so sorry to hear of Uncle Otto’s passing, my thoughts and prayers are with you, please accept my sincere condolences…….Russell

So very sorry to hears of Ottos passing, ,May you all find comfort in each other,,

Pearl ; So sorry to hear of your father’s passing that joy in knowing that is not in pain and at peace.Wish I could be there for you my friend ,hugs Martha Phillips Bolt
l

Pearl so sorry to hear of your Fathers passing. Sending my Condolences. to you and your family..

It is with great sadness we hear of Otto’s passing. He is surely to be remembered as a wonderful, thoughtful, caring man of great integrity. He has left his mark on all who knew him.
To the family, his partner Winnie, and friends, in spite of your loss, you must now remember and cherish the many memories he left you.
Our thoughts and prayers are with you at this time.

sorry to hear of mr. fianders passing.i have fond memories of him, Bernie and myself playing darts in his porch and staying behind after school to play ping pong with him.Unforgetable man

So sorry for your loss Thinking of you all.

So sorry to hear of Otto’s passing. We have lost a good friend and he will surely be missed. Thinking of you all.

A wonderful gentleman in every facet of his life, husband, father, grandfather, great grandfather and true friend and teacher. Rest in peace Otto

Thoughts and prayers are with the family.

So sorry for your loss. Otto was a beautiful person with a kindred spirit. May he Rest In Peace.

Pearl,Brenda ,Carly ,Winnie and families
So sorry for your loss Otto was such a kind sweet man and dear friend. I have so many fond memories of the times Gerry and I spent together with him. Sending my love and prayers to you all. Love Nancy

So sorry to hear of Ottos passing.Our thoughts and prayers are with you all .Walt has many fond memories of fishing with Otto

Our most sincere condolences to all of Otto’s family. Our thoughts and prayers are with you.
Edna & Nathan
Bill & Jo-Ann

So sorry for your loss. Mr. Fiander was a great teacher and in my formative years probably shaped my character more than anyone else I know.

So sorry for your loss Pearl

We are so very sorry to have lost such an integral part of our family (Mr. Otto Fiander ).Otto was an incredible man,such a kind hearted,generous and loving person.Mom (Winnie Davidge)and Otto both having suffered the loss of loved ones,found love and strength in each other and over the last 16 years their love for each other grew stronger each day. We are so glad that they found each other and enjoyed so many happy years together. We have many memories of Otto over the years especially our games of cards and crib which We all looked forward to. We will truly miss Otto and share in the grief that is being felt by all.

Pearl, Brenda, Carley, Winnie and families, so sorry for your tremendous loss. Thinking of you all and sending you our love and prayers.
Love Leo, Susan and family

We are so sorry for your loss. Our thoughts and prayers go out to the entire family. With deepest condolences, Michelle & Randy.

So very sad to learn of your Dads passing. He was indeed a gentleman who was kind and generous. Top Shelf. The world has certainly lost a great and wonderful person. I have so many memories of both your parents and they treated me as one of their own. He was so very fortunate to have found companionship in his last years. Deep condolences to Pearl, Brenda, Winnie and your families.

Dear Brenda and family,
We are saddened to hear of your father’s passing. The love and respect her garnered from his children, from his family and friends, and from his career reveal what a great and kind man he was. What a wonderful legacy he leaves behind. Our thoughts and prayers are with you and your family. Bill and Doreen Grieve

My sincere condolences to Mr Flander’s family. .
God bless you all..

Angela
so sorry to hear of your dear Poppy’s passing ,
My thoughts and prayers are with you and your family
Janet Ivey

Sincere condolences to you Angela and your family! He was an extraordinary man who lived a long wonderful life. I know you will miss him tremendously but great memories you have of him will help you over the coming days! ????????

Sincere condolences to you Angela and your family! He was an extraordinary man who lived a long wonderful life. I know you will miss him tremendously but great memories you have of him will help you over the coming days! ????????Cindy Sullivan and family

My deepest condolences to Pearl,Brenda and family, your Dad will be greatly missed..

Condolences to the family of Mr. Fiander. I knew him from my teaching days in the English Harbour west area. RIP.

Condolences to all family members during this sad and difficult time. Mr. Fianders wife was my grandfathers sister. Unfortunately , I never got to meet him. I did hear many positive things about this man. RIP

Sending heartfelt condolences to Mr. Flanders family and friends. It was a pleasure to have been a part of the care of such a gentle, caring man. God bless you all at this time and the days ahead.

Cheryl and I offer our sincere condolences to the family and friends. Otto was a great man who I respected and admired all my life. He had a great influence on me as I was growing up. Right from his welcoming remarks, on my first day of school in Coomb’s Cove to my graduation year in English Harbour West. Otto the Great.

Condolences to family
Mr. Fiander was a will respected man, great teacher to all he teach.

Brenda, Pearland and families and to my sister Carley and her three kids, Bobby, Karen Sheena and their children, Evah,, Mariah, TJ, Haylee and William, please accept my condolences on the passing of your dad and pop. Otto was an integral part of our family and probably one of the nicest person ever to leave this world. His kindness and gentleness and love for his family lalways shipbrokers through.

To: Mrs Davidge, Bernice, Sarah, Yvonne and their families. So sorry to hear of Ottos passing. We only knew Otto for a short time through his visits to St. John’s. A true gentleman in every way. A class act to his family and his chosen family. . May he rest peacefully leaving you all with wonderful memories.
Our deepest condolences, Debbie and Steve Power