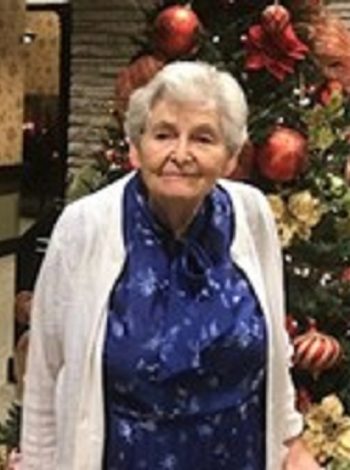 Ruth was born in London, August 26th 1929, to parents Harry and Ethel Goodman-Ross. Ruth’s biological mother died when Ruth was only 5 years old and her younger sister, Stephanie, were raised by their step mother Evelyn.

Ruth grew up in London when stores sold apples and pickles in barrels. I assume in separate barrels. When the war began Ruth and Stephanie were moved about the country to find safe haven. Thus Ruth’s early education did not run smoothly as the girls had to adjust to new schools and classmates. Avoiding participation in physical education became Ruth’s number one talent.

Eventually Ruth turned her attention to the medical profession and studied as a midwife in Plymouth, England. It was then that (early 1950’s) that Ruth’s best friend Jill (and later Dorry as well) convinced her to see out an adventure. Ruth quickly dismissed heading to Africa or any place that required horseback riding as transportation. Thus the ladies decided to join the Grenfell Mission and headed to Flower’s Cove, Newfoundland. Best described by her son Peter after looking through old photos.

“There she is, my mom, smiling in a snowstorm, with sled dogs, digging gardens, commandeering small watercraft, tending a stove at a campsite, greeting a sea plane, and wrestling two small boys into setting still for a photo. She came to Newfoundland to work at a Grenfell Mission rural hospital. She stayed and married the Anglican priest. Her family was thousands of miles away across the Atlantic Ocean. Yet, she made this place, her history and her story.”

Marrying Jacob was, to her, the highlight of her life. Jacob was the minister but as Ruth’s oldest son, David, stated “Nurse Ross became a Legend.”

Ruth followed Jake, with three sons, to London as he studied at King’s College and he became the parish priest. Then it was off to Lennoxville, Quebec to be a surgical assistant while Jake completed his studies at Bishop’s College. Jake’s parents came along to care for the three boys. Despite Ruth’s best efforts the boys never did learn French.

Ruth and Jake returned to Newfoundland and Ruth worked at the Janeway while Jake became the Anglican minister in Petty Harbor. While in Petty Harbor her youngest son, Peter, was born. The family moved to a new home built by Jake in the Goulds. While Jake eventually turned to teaching Ruth too went back to school and began her career working with the V.O.N.

Jake passed away in 2014 but Ruth continued to write her story. She survived open heart surgery in 2015 and got to see her two great grandchildren Kyle and Lyla (Sarah’s children) grow. They came to know her as Nanny Roo. As Ruth’s health began to fail and she found herself confided to bed at St. Pat’s, pictures and videos of Kyle and Lyla were her greatest joy. The odd times of the last two years brought isolation but it was always brightened by two cherished grandchildren.

As Sarah said “She (Ruth) was one tough old Brit.” Greatly loved and someone we can all aspire to become.

At Ruth’s request cremation has taken place. Visitation will be at Carnell’s Funeral Home, 329 Freshwater Rd., on Wednesday, June 15 from 2-4 and 7-9. Funeral service will take place at the Anglican Cathedral, 16 Church Hill, St. John’s, at 11:00 AM on Thursday, June 16. Interment will follow at the Anglican Cemetery, Kenmount Rd.

Special thanks to all the wonderful staff on 2N at St. Pat’s Mercy Home for your care and kindness during Ruth’s last years.

Donations in Ruth’s memory can be made to the Anglican Cathedral.

So sorry to hear of your moms passing, hugs to you all . I remember spending lots of time at your house across the road . Chris , Noel and myself were great friends lots of time making phones with tin cans and strings . Mrs Rogers always made us feel welcome great childhood memories for sure . . Condolences to you all .

My deepest sympathy to all of Ruth’s family. I have fond memories of Mrs. Rogers, as she was known to me, as a child in Petty Harbour. May Ruth Rest In Peace and Rise in Glory.

So sorry to hear of your mom’s passing.
My thoughts and prayers are with you all
in these most difficult times.

To the Rogers family, sorry about your mom’s passing. I always enjoyed having a chat with your mom. My prayers and thoughts are with you all. God bless you all.
Grace Chafe

Dear Mike and Family, we were so sorry to hear of your Mum’s passing. Thinking of you all during this difficult time and sending all our love. Your beautiful memories of her will get you through. Love:
The Bishop Family

Dear Peter and the Rogers family – Ruth left a legacy of adventure, unwavering community service, and her loving, expansive family. She had an amazing life, and I was honoured to share some part of it.. Her memory will live on through all those who she touched with her love and caring. xo

Peter, we are so sorry to hear about your mom. She was a remarkable woman who also baked a superb pound cake! We hope you, Mike, Chris, & Dave and all your family are comforted by the many cherished memories you have of her.
Love,
Bernice, Andy, & Gina

Mike, my deepest condolences to you and your family.

I ‘m so grateful to get to know Ruth via Peter’s many memories, stories and photos that he has shared with me, and now from all of the stories from her family and friends that I am hearing this week. She really was a remarkable woman – one of the ones who had such strength of character that she led the way for so many others, at a time when women had many fewer options than today. She led a life of service and impacted so many people, from her undeniable love and dedication to her family, to the many others she would have helped in her community and through her work. My heart goes out to all who knew her at this time, and I’m so glad you did have the gift of her in your lives.

We have such fond memories of Ruth. She worked in the Intensive Care of the Janeway where our son was a patient for several months. Myself and Dave got to know her and love her and later we spent time with your mom and dad through St. Paul’s church. What wonderful memories we have and cherish.

Dave and Family—Our sincerest condolences on the passing of your Mom.

Dave and family—Our sincerest condolences on the passing of your Mom.

Our thoughts and prayers are with you all. We have many fond memories of our get togethers and camping days. Blessings. Wilson & Lillian Tibbo..

Sincere condolences on the passing of your mom, she was a very sweet person. I remember your mom and dad visiting my parents in Petty Harbour and myself babysitting you boys in the rectory when your parents had meetings to attend. It was a pleasure to have known your family. May your mom be at peace with your dad. God Bless.

Our thoughts and prayers are with you and your families.

After reading the obituary for Mrs. Rogers (as I honestly never knew her by any other name) I am awestruck at how little I really knew of this amazing lady!

I’m getting visions of a true pioneering spirit to have left her immediate family behind in England and to take a complete leap of faith and determination to start her own family and roots here in Newfoundland!

So sorry to hear of the loss of your mother. Mike Treasure the memories you shared and she will always be with you. .Condolences to you and your family.

David, Michael, Christopher, Peter and family. We are so sorry to hear of you Mom’s passing, she was such a sweet lady. Thoughts & prayers are with you all at this very difficult time.

Having been The best man at Ruth and Jake’s wedding and knowing them for more than 50 years we had a few camping trips together and lots of family visits.. A wonderful family. Ruth was an exceptional person. On Wednesday of this week I will have surgery and wii not be able to attend the family gatherings. My condolences to all the family and every blessing

Based on what I saw in person, what I heard about from Mike, and what I read in the obituary, Ms. Rogers was an amazing lady that will be missed by many, many people. Our condolences to her family and those who knew her.