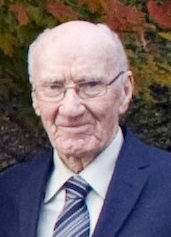 Passed peacefully away on September 25, 2016, at the Leonard A. Miller Center, Thomas Richard Hammond, age 87, in the presence of his loving family, after a long and healthy life. Predeceased by his parents Lucy and Ambrose Hammond, brother Jim, and sisters Violet Bradshaw and Vivian Hammond. Leaving to mourn are his wife Margaret of 63 years, son Andrew (Sylvia), daughter Vivian (Tom Franks) of Cambridge Ontario, grandchildren Lori (Mark March), Andrea (Chad Clothier) of Fort Vermilion Alberta, Richard Hammond, Michael Franks (Alannah) of Guelph Ontario and great grandchildren Dylan, Kara, Amber and Lily. Special thanks to the staff of the palliative care unit at the Dr. L.A. Miller Center for their compassionate care. Cremation has taken place. The family will accept visitors at Carnell’s Funeral Home, 329 Freshwater Road, St. John’s, on Tuesday, September 27th, 2016 from 7 – 9 p.m, and Wednesday, September 28th, 2016 from 2 – 4 p.m and 7 – 9 p.m. A funeral service will be held in the Carnell Memorial Chapel on Thursday, September 29th, 2016 at 2 p.m, with inurnment to be held at a later date. No flowers by the request of the family. Donations may be made to St. Lawrence Anglican Church, Portugal Cove, or the Children’s Wish Foundation.

To Marg and family
Sorry to hear of Tom’s passing. He will be remembered on shoe cove road as a quiet man who enjoyed life.

Marg and family, sorry to hear of Tom’s passing. Our thoughts and prayers are with you at this time, may he rest in peace.

Andrew and family
Please accept our sincere condolences on the passing of your dad. Take Care and God Bless

Marg & family, so sorry to hear of Tom’s passing. My deepest condolences to you all

Marg,Andrew & Vivian & families please accept my deepest condolences on the passing of your husband and father.

Sorry to hear about the passing of Tom. He will be forever missed. My sincere condolences.

so sorry for the passing of tom. he was a lovely man and he will be missed. god bless you marg and family

We are very sad to learn of Tom’s passing. Our sympathy and thoughts are with you at this time of sadness.

We are so sorry to hear about Tom’s passing. Our thoughts and prayers are with you during this sad time. God Bless.

Our thoughts and prayers are with during this difficult time. Rest in peace Uncle Tom

To Marg, Andrew, Vivian and family;

Sorry to hear of Tom’s passing. Please accept our sincere condolences at this very sad time. Rest in peace Tom.