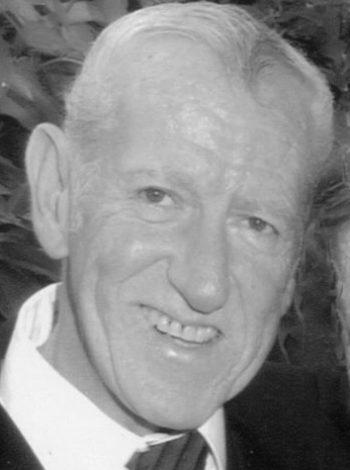 It is with broken hearts we announce the passing of our husband, father, grandfather Tolson Wayne Churchill age 68 years, who passed away at his residence in Portugal Cove surrounded by his loving family.

Dad was the most loving, caring, kind hearted man one could ever meet. He lived life to the fullest and enjoyed each and every day by spending time with his family, who he absolutely adored. He only had 4 daughters but through them had an extended circle of adopted daughters.

He was a dedicated grandfather who loved every moment of spoiling his grandchildren. Whether he was with them riding bikes, watching soccer games, playing hockey, pushing strollers, playing games or stocking up on “Pops” favorite treats. He was “Poppy Tols” to every child that knew him.

Dad worked at Canadian Tire his whole life. Dad’s genuine friendliness made him stand out to many customers, who in turn became life long friends. He was a true Maple Leafs fan to the end.
Tolson instilled in his family a sense of family values and virtues through his hard work, humor, love and compassion. Through his relationship with his life long partner they created many wonderful memories and a strong family bond that will carry on for years to come.

Flowers gratefully accepted or donations in his memory may be made to St. Lawrence Anglican Church, or to honor his love of animals donations may also be made to his daughter Colleen’s Rescue Cat Fund.

Marg and family.
So sad to hear of Tolson passing, my thoughts and prayers will be with you. I remember his ever ending smile. May God bless you.

To The Churchill Family ………….So So Sorry To Heard About Tolson….I Drove Back And From Work With Him For Many Years……….He Was A Sweet Man………..May God Bless You All……..RIP My Friend

To the Churchill Family,

I have been out of the cove for many years but as a young boy i looked up to Tolson as a role model. He was and will always remain in my memory as a goodhearted, caring, soft spoken man of morals. When i started serving on the alter with Reverend Harvey and singing in the choir, i remember him telling me to “stay at it” and i did, for many years….. I am a better man today because of the mentor-ship i received from Tolson……many prayers for you all at this time and God Bless

My thoughts and prayers are with you all as you deal with such a difficult loss. Faith and the caring love of family and friends will help you as you face each new day.

Marg and family, I am so sorry to hear the passing of Tolson, know that you are all in my thoughts and prayers at this very difficult time, God bless you all…..

Enid and Family,
I was saddened to hear of your Dad’s passing. Take comfort in the memories you shared over the years. We are all thinking of you at this difficult time. God Bless.

Marg and family,…we are so sorry to hear of Tolson;s passing. He was a lovely person and always had time to stop and speak with you! We will keep you all in our thoughts and prayers in the days ahead.
God Bless

Marg & Family
So sorry to hear of Tols passing. My sincere condolences to you all, Please know you are in my thoughts and prayers during this difficult time.
God Bless you all!

Marg and family our deepest condolences on the passing of Tols . I worked with Tols for many years at Canadian Tire and have many fond memories of him .Keeping you all in our thoughts and prayers .

Our deepest condolences on your loss.

Enid and all the Churchill family. My thoughts and prayers are with you all Tols was a true friend and a great man to all who knew him. I will always remember our times together at Canadian Tire where he was as master at his trade. Tols sold more tires than anyone in the business and was trusted by all his customers. He was a well respected employee by all his coworkers. He, Brian and myself have many great times together and I’m so glad I could say he was my friend. I will miss you buddy. God bless you and look after you.

Thinking of you Cindy and all your family. God bless

I only knew tols for 3 years but he became very close to me & my 3 kids who referred to him as poppy tols. We will miss you very dearly & always know that you meant a lot to us . It’s never gonna be the same without you out on the road to chat with but I’ll always remember that smile. Intill we meet again rest easy tols , My heart goes out to all his family xoxo

Our thoughts and prayers are with the family at this difficult time. So sorry for you loss. I knew Tolson and his siblings years ago when I lived in Portugal Cove. God Bless you all. Keep his memory in your hearts.

Our deepest condolences on the passing of your Dad. Thinking of you and your family during this difficult time.

so sorry for your loss,may you be comforted by your memories of Tolson

Marg and family
We would like to express our deepest condolences to you all. It is never easy to lose a parent especially one so close to your hearts. May family and friend comfort you at this difficult time.
Take care and God bless.

Tolson was a wonderful friend but to me (Russell) he was FAMILY. Cherish the memories and talk of him often to keep his memory alive within your hearts. All our love and prayers. Russell and Donna Churchill

Margeret , girls and families please accept my deepest condolences on the passing of your husband and father he was a lovely man always a smile when you met him , may gods love comfort you all in the coming days.

It is with great sadness that we express our deepest sympathy to the whole family on the loss of such a wonderful man (husband, father, grandfather etc.). Cherish the beautiful memories and let his love live on in your hearts forever. May God give you all strength in the days and weeks ahead to ease your sorrow. Our thoughts and prayers are with you.

It is with deepest sadness, that I heard about the loss of Tolson. A very close childhood friend of mine and and we shared many happy times together. Please accept our sincere condolences. He is free of suffering and resting with his family in Heaven. God Blees his family in this sad challenge.

We grew up across the road from each other( literally, our gates were directly opposite each other) and I will always remember the entire family. It was a relationship that probably can’t be understood today but back then it made perfect sense. Dad was pouring a foundation under our house and he told Pete, who in turn told the boys, “Harris is pouring a foundation tomorrow, so get up, go over, and help…that’s the way things were done back then. Art, Len, Lloyd, Tolson and Doug were all there first thing in the morning, until the job was done. No one got paid! It’s a tribute to a time gone by !
My condolences to the family and goodbye to an era that will never be realized again..
To Peggy, who was, and still is a life long friend to my daughter, I will always remember you from the time you delivered my paper to the time you were at my post wedding party ( where you were severely sunburned as I recall)
I could go on and recall so many memories but that would take forever, so I’ll leave it that that.
Derek Churchill

You are all in our thoughts and prayers at this time. Hold your memories close to your heart and take comfort in family and friends.

Marg and Family,we are shocked and saddened by the news of Tolson’s passing. He was such a special man and always a pleasure to speak with. Please know that you are all in our thoughts and prayers at this difficult time.

Marg, girls and families,
Please accept our condolences. I am so saddened by the news of Tolson’s passing. Your hearts must be broken. Our thoughts and prayers are with you during this time.

Sincere condolences to all of Tolson’s family.

My heart breaks for the family and dear friends of Tolson. I know what a kind and beautiful man he was and how everyone loved him and he loved them back – especially his wonderful family. Your loss is huge. Remember your many happy memories as you deal with his passing one day at a time. He is at peace now. Thinking and praying for you all. Jacinta

I am broken hearted to hear of Tolson’s passing. My Thursday nights won’t be the same. Marg and family you are in my thoughts and prayers Debbie Webster

So sad to hear of Tolson’s passing. He was a one of a kind family man that thought the world of all his children and grandchildren. He also thought the world of Lucille. He always found time to sit and talk with her and answer her many questions. And after her daily visits she always came home stories about her adventures. Everything from swinging in the swing to eating salt meat and toungue, which is still one of her favorites to this day. He will be missed by many. Sending our condolences to all of you at this difficult time. May you find strength in your friends and family to help ease your pain.
Love: Connie and Lucille

we are in shock of the passing of tols, god bless to the family.

by keith & regina mcdonald
September 27, 2016 at 5:52 pm
“He had a nature you could not help loving, and a heart that was purer than gold and to those who knew him and loved him his memory will never grow cold.”