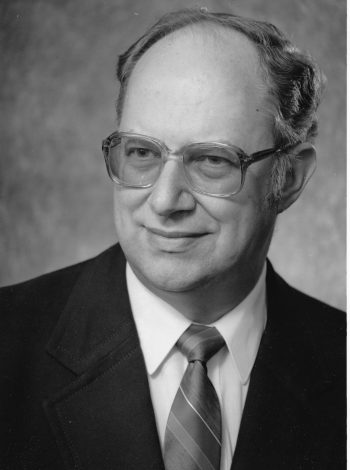 Cherished husband of Jane Pippy (née Butt).  Born December 16, 1940 in St. John’s, he was the son of the late Herbert Charles Pippy of St. John’s, and Audrey Elizabeth (née Chaulk) of Carmanville.

John and Jane were high school sweethearts. They were married on November 9, 1962. They had 56 happy years of marriage. He was a loving husband and a treasure. He will be forever loved.

John grew up in St. John’s and studied biology at Memorial University of Newfoundland and at the University of Guelph. He received his Ph.D. in 1975. He began his career with the Federal Department of Fisheries and Oceans in 1965. While there, he was a respected research scientist, manager, and represented Canada abroad on international committees. In his later career he won the Federal Silver Medal Award of Distinction for his work. He retired in 1995.

Since childhood, he was an enthusiastic inventor, which lasted all his life. He had a curiosity about many things. He was an artist, loved nature and all living creatures. He was in awe of the wonders of the universe. He was a published author, and a self-taught Egyptologist. But most of all, he was a beautiful human being; kind, compassionate, gentle, and loving. He was a man of deep faith and had an abiding love for his Lord.

The family would like to thank Dr. Gary Tarrant for many years of care, and more recently Dr. Amanda Tzenov for her exceptional compassion and home visits.

To dear friends Dr. Kim Hong and Baden Hiscock for their faithful friendship over the years.

In lieu of flowers, donations in his memory may be made to L’Arche Avalon, or a charity of one’s choice.

For you shall go out in joy,

and be led back in peace;

the mountains and the hills before you

shall burst into song,

and all the trees of the fields shall clap their hands.

We were saddened to learn of John’s passing this weekend, and we send our love and condolences to all of you. Our thoughts are with you.

So sorry to hear about your dad’s passing. My thoughts are with you and your family during this difficult time. Sounds like you have many of your dad’s traits.

Dear Jane and family,
I am so sorry to hear of John’s death. He was a lovely man. My late husband, David, thought of Bud, his parents and his sisters as family, and enjoyed the years he lived with them. I remember well, the last visit David and John had together, neither was well and their compassion for each other was evident.
I wish you and your family peace.

It is hard to find the right words to say how much Uncle John meant to us, and how sad we were to hear of his passing.

We have, as you do, a lifetime of memories of Uncle John. He was kind, gentle, intelligent, gracious and loving. He had a wonderful smile and we always felt welcome in your home which was full of love and laughter. Aunt Jane, we know Uncle John was your beloved, and we feel honoured to have witnessed your love for each other over the years. It is a rare and special gift.

Although Uncle John is no longer present, we are grateful that we do not grieve as those who have no hope. We will see his loving smile once again some day!

All our love and prayers,

Doug and Family,
So sorry to hear of your dad’s passing. Sometimes it is hard to find the right words to console the grieving soul. May you find comfort knowing others walk this path with you and are there to support you in whatever way you need them. You are in our thoughts and prayers.

Dearest Jane: Thinking of you and praying that you and the family will be surrounded by God’s everlasting comfort, his sustaining grace and peace as you go through this difficult time. God bless and keep you.

To the Pippy Family,

My deepest condolences for your loss. Thinking of you at this time.

Jane so sorry to hear of your husband’s passing. Our thought and prayers are with you and your family as you go through this difficult time.

To Jane and family,
I and Slava were deeply saddened the news of John passing. It was an honour to know such a great person. His kind face and soft smile will remain forever in our memories.
May God rest his soul in peace.
Sincere condolences from Valentina and Slava

Sincere sympathy to you and your family at this difficult time. I had hoped to visit the Funeral Home but wasn’t able to make it. I was happy to pray with you at the Palliative Care Unit after your husband had passed. My prayers are with you all.
Love and blessings,
Sister Monica

To the Pippy Family
John’s obituary conveys just about everything one would say about his character..
In short, a wonderful caring human being and a very dedicated and productive research scientist and manager.
May he rest in well deserved peace..
Dr George Winters
DFO Research Colleague

To Doug and Family
We are so sorry to hear of your father’s passing. He is at peace now. Reading about him highlights an extraordinary man and a legacy of caring and compassion that he has left you, your siblings and his grandchildren. Sincerest sympathy.

To the Pippy family,
I was saddened to learn of John’s passing. We had known each other since college days and I had the pleasure of working with John at DFO for many years. He was highly respected both professionally and personally. Please accept my sincere condolences at this sad time.
Mac Mercer

Hello Jane and family. I am currently visiting in Ontario and so will not be able to pay my respects. please know how sad I was to hear of Bud’s passing. He will be missed. With sincerest sympathy and deep affection. Bob Pike and Barbara Legge Pike

To Mark and family,
So sorry to hear of your dad’s passing. My thoughts and prayers are with you and your family at this difficult time. Wishing you peace and acceptance.

Jane, John, Christine, Mark, Douglas and family.
I was saddened to learn of the death of John. In my minds eye I see him in worship at the West End Baptist Church,teaching the College and Careers Sunday School class and participating in the life of the congregation.
I am grateful that John was following the Lord Jesus Christ who said, “I am the resurrection and the life. He who believes in me though he dies, yet shall he live. ” John 11:25 I am remembering you in prayer.

Jane and family.
Sorry to hear of John’s passing. May your beautiful memories comfort you at this time.

To: Jane & Family & The Butt Family

Our thoughts and prayers are with you at this time of sorrow. May the God of peace and comfort, sustain and keep you today and in the days that lie ahead.

Dear Jane and family.
So sorry to hear of John`s passing . Wishing you peace and acceptance .
Sincerely Peggy

So sorry to hear of John’s passing. Lloyd and I are out of town, but we will certainly be praying for you and all the family. Please give my love and condolences to June.

Dear Jane and Family,
Zelma and I want you to know you are in our thoughts and prayers. John’s battle is over. We will always remember him as he looked in the posted picture. Sorry we aren’t around to share in the service.

Dearest Jane and family
I am indeed sorry for your loss but am thankful for God’s provision throughout the long and challenging journey over the past number of years .

With my love and in the wonder of grace

Jane and Family,
Very sad to hear of John,s passing. May your memories and strong faith sustain you.
Brenda Cooper