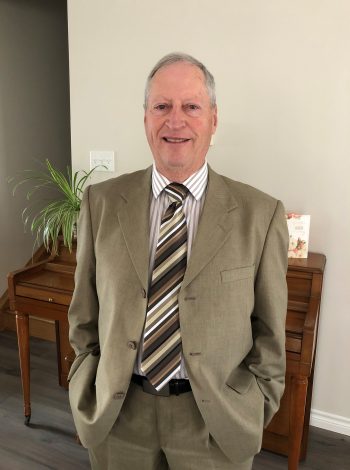 It is with sadness that we announce the sudden death of our husband, father, brother and friend at his home garden in Paradise on March 20, 2021 at the age of 71.

Henri was born in North Battleford, SK on September 22, 1949 with his twin brother Aimé. Growing up in Delmas, SK the twins became well known for their love of sports, especially hockey, and as hard workers like their father Raymond.  Henri was a 3rd generation railroader who worked 31 years for CN rail until his retirement in 1998. He met his wife of 48 years at high school in Battleford, SK.  They married in 1972 and lived and worked in the 4 western provinces as they raised their 3 sons. Later in life they moved to the Island of Newfoundland to be closer to family. Henri was well known for his exuberant personality, dedication to family, sense of humor and seemingly endless railroad stories.

Everywhere Henri lived he made good friends – especially among the members of the Christian congregation of Jehovah’s Witnesses – a united global brotherhood. He was a zealous volunteer in preaching the good news of God’s Kingdom – a work started by Jesus himself. He had unshakable faith in God’s promise of a resurrection of the dead. We look forward to the day we will see Henri again.

He was predeceased by his parents Raymond and Angeline (Lehoux) Rousseau.

Instead of monetary donations please give some time to investigating the Bible’s answers to life’s big questions totally free at jw.org.

I will really hold on to you with my

. Take comfort in knowing that Jehovah cares and understands how we feel when we lose our loved ones. Soon when Jehovah’s appointed time is here we will all be reunited. What a wonderful blessing that will be. Keeping you all in my thoughts and prayers.
Jocelyn Cobb

Alma and family:
Thinking about you during this very sad time. Your memories and wonderful hope for the future will help sustain and comfort you as you mourn the loss of a very much loved husband, father and grandfather.

Beautiful words from a loving Christian family. We’re sorry for your loss, but trust in the promises soon to come, when you will see him again, and we’ll meet him. Our love and thoughts are with you at this time.

Alma and family, we were so shocked to hear of Henri’s passing. We have many fond memories of you and Henri. Our thoughts and prayers are with you and your family. We look forward to seeing. Henri in the near future.

We were shocked and saddened by the news of Henry’s sudden death. Our thoughts and prayers are with you, Alma, and your family. We share Henry’s strong belief in the resurrection hope and remember fondly our privilege of working with you for a short period of time in the Conception Bay Congregation. May Henry’s favorite scriptures and so many more bring you a measure of comfort in the days ahead.