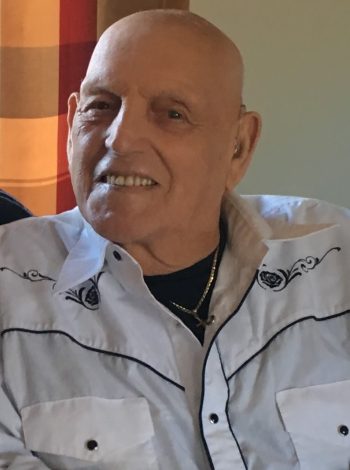 Also leaving with fond memories are Shirley O’Brien; Charlie and Sylvia Mercer, as well as a large circle of relatives and friends.

Thank you to the (9) Homecare Employees that took care of Dad during the last number of months but a special thank you going out to his special girl “Christa Doyle”.

Cremation has taken place. Visitation will take place at Carnell’s Funeral Home, 329 Freshwater Road on Thursday, August 29th from 10 a.m. – 9 p.m. A mass of Christian burial will be held from Holy Family Church on Friday, August 30th at 10 a.m. with interment to follow at Holy Family Cemetery, St. Thomas Line, where Raymond and Elizabeth will be laid to rest together.

Flowers gratefully accepted or donations may be made to a charity of one’s choice.

To all the family
We are so sorry to here about you fathers passing God has called a other angles home . Heaven is rejoicing to have him-there your father was a pleasers to be around and a joy to know Your father will all was be remember in our hearths and prayers

Please know that Ray is in our thoughts & prayers as you all are at this difficult time. A lovely man, now at rest with Elizabeth & both alive in fond memory for eternity.

We are so sorry for your loss. May your dear father rest in peace. God bless you all on this sad and difficult journey.

We are so very sorry to hear of Raymoand’s passing, please accept our deepest condolences.

Alan, we are very sorry to hear about the passing of your Dad. Our deepest condolences to you & Margaret & families. Our thoughts & Prayers are with you.
Debbie & Randy Thorne, NL

Condolences to your family. Sorry to hear of his passing..

Dear Alan & Margaret Ann, Patsy, Gerard & Family, Janet & Family, Juanita & Family.. Please know our deepest thoughts of sympathy are with you all since learning of Ray’s passing.. You are all going to miss him so much, but keep his memories alive by remembering all the many wonderful times you spent with him . He is a special man, and it is necessary to grieve .. for to grieve is to love first.
Sincere Sympathy
Joyce & Ozzie

To the Butler Family,

I Was very saddened to hear of Ray’s passing , although we never met in person, our many conversations over the last two and a half years gave me time to get to know him. We shared both laughter and tears and many things concerning our families. I truly will miss hearing from him, our deepest sympathies to you all.

Juanita and family please accept my deepest condolences on the passing of your Dad. May you all find strength, to help you through this difficult time, in the many wonderful memories you have of your dad. My thought s and prayers are with you all! xo

The Butler Family,
Our deepest sympathy and love to all of you on the loss of your Dad Ray. We remember him with many fond memories we shared as families who spent many wonderful times together throughout the years. I’m certain your Dad and my Dad are getting re-acquainted in the heavenly realm of CB and song. Our thoughts are with you all.
Vina & Jack Ronan

Juanita,Shane & Wes so sorry for your loss. Keep your memories close.

Sorry for your loss. Ray was a great carpenter whom I had the pleasure to work with at the old school on St. Thomas Line. He was always a happy guy and loved his work. Your days go so much better when you work with people like Ray Butler so I am sure anyone who knew Ray must of enjoyed being close to him. Rest in Peace Ray and say hi to Betty!

Juanita and Butler Family,
Sorry for your loss. Our thoughts and prayers are with you. God Bless.
Betty and Spencer Morgan

So sorry to hear about your dad. Thoughts and prayers for you, Patsy, and your family.

Janet, So very sorry to hear of your dad’s passing.. Please accept our deepest sympathy.
Gary and Pam Eavis

Janet and family, so truly sorry to hear of your Dads passing. My thoughts and prayers are with all of you at this moment in time. RIP Mr. Butler????

Sincere condolences to you Janet and family at this sad time .Thinking about you at this time .

Janet and family so sorry for loss. Thinking of you at this sad time ❤️

Patsy,Gerard and Juanita &family,So sorry to hear of your fathers passing.Sincere condolences to all the family.May he rest in peace reunited with your Mom.A long life well lived.Hugs!Frazer&Joanie

Condolences to my cousins, Patsy, Janet, Allan and Juanita and their families on the passing of their beloved DAD!! I have many wonderful memories of uncle Ray and I am happy that I got to help him celebrate his 90th Birthday this past March!! R. I.P. Uncle Ray! ❤️❤️

I am deeply saddened to learn of your Father’s passing. I have fond memories of him at Betty’s home in Foxtrap. Please know that my thoughts are with you all today.

It was a pleasure to know Ray for the short time that I did. I was always greeted with a smile and that’s how I will remember him always. My thoughts are with his family during this time.