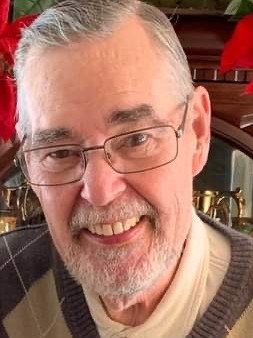 Richard George CHALKER, passed away peacefully at his home in Paradise Newfoundland on

October 10th, 2021, at the age of 82 years. Born February 19th, 1939. Richard was survived by his loving wife Elizabeth Pardy Chalker of 62 years of marriage. Predeceased by his parents James R Chalker, Margaret L Chalker and his only son James Chalker and his niece Holly Langin, grandparents and extended family.

Richard loved being involved in his community and spent several years singing in church choirs, was a proud member of the legion in Nova Scotia and Newfoundland and was involved in local politics as was his father.

Richard loved his friends and family, he enjoyed storytelling, jokes, music, dancing and a wonderful game of cards especially cribbage. He grew up in Newfoundland, he went to Kings Edgehill college in N.S. and returned home to work in sales with the family business. He loved living near the ocean, especially at his cottage in Middle arm Avondale, where many friends congregated over the years. He spent many hours tinkering in his garage, wood working and having morning coffee with the boys.

He will always be lovingly remembered by his family and friends.

There will be a memorial and celebration of life to be announced at a later date.

In his memory donations may be made to the Heart and Stroke foundation or the Diabetes society or a charity of your choice.

Dearest Elizabeth and family, please accept our heartfelt condolences. Richard will be missed by his many friends. We have many happy memories of enjoying wonderful get togethers where Richard contributed laughs and beautiful stories.
May Richard Rest In Peace:.🙏
Pat and Peter Hutton

Our condolences sent to you and your family Vicki, your dad was a great man ❤

Sorry for your lost. He was a great person. I enjoyed chatting with him at the bank in Holyrood.

Thinking of you at this sad time. So sorry to hear of your brothers passing. May your family and your memories give you strength and comfort as you move forward.

I am so shocked to hear this news. My condolences to his family.
I have had many of conversations with Richard for he called me at least twice a week at the NLCU where I work.
He was a great person and will be missed

So sorry, Eliabeth to hear of Richard’s passing. Thought of you people often since you moved to NL and wondered how you both were doing. We always enjoyed seeing Richard which was more often when you lived in NS. May all your good times and memories with your family and friends stay with you and please remember our thoughts and prayers are with you.

Liz and family, Tim and Judy, Jill and Cliff and families. We are saddened to hear of Richard’s
passing and know he will be missed by many. We enjoyed the times we spent in his company… always a warm and welcoming smile. Get comfort from your many memories. Take care of each other.

Dear Tim, Judy & family,
We are sorry to .learn that your brother, Richard, has passed away. We are thinking of you and send you our deepest condolences.
Gordie & Eileen MacNab

So sorry to hear Richard has passed away. He was a great person, a good friend and I had the utmost respect for him.
RIP Richard you’ll never be forgotten.

Tim, Jill and families,
I was so saddened to learn of Richard’s passing. While I had not seen him often in recent years, I do remember fondly his quick wit coming out in any conversations I had with him over the years, especially through my lifelong friendship with Tim.

I, too, know the pain of having lost an older brother. It brings us all one step closer to facing our own mortality. My sincere condolences to you all on your loss. You are in my thoughts and prayers.

Dear Elizabeth and family, we are so saddened to hear of Richard’s passing. Although we haven’t seen that much of you & yours in the past, Richard is so unforgettable. Our love, thoughts and prayers are with you all,. May you find comfort in the many memories and the love surrounding you. Hugs, Josephine & Bob❤️!

Sending love and support to the family . May all the memories and special times bring comfort during this very difficult time .

The Chalker Family, our sincere condolences on Richard’s passing. May your fond and loving memories get you through this very difficult time.

Hi Tim and Family and Vickie (daughter),
I had great chats with Richard at our Feildian lunches over the years. He enjoyed coming so much and we usually ended up talking about our shared Chalker history. He was funny and outspoken. We also chatted about his daughter Vicki, a student of mine while I was teaching at Macdonald Drive. I will miss our times at our lunches. Please accept my heartfelt condolences.

I am so sorry for your loss. I have not seen Richard for many many years but he was a friend of my brother (Fred) and as such I had the pleasure of his company from time to time, but not in recent years. I remember him as being larger than life .. always fun loving and very kind hearted.
My best to the family
Anne Richardson (Healey)

My sincere condolences Elizabeth and family. Richard (Dick) was a kind and happy man who loved life and especially his family of whom he held such pride. I was fortunate to have met Dick and Elizabeth through my brother (Fred Healey), many years ago. While I haven’t had the pleasure of his company in recent years , I have fond memories of his love for telling a story and having a laugh. He was always the life of any gathering. He will be missed.
My thoughts and prayers are with you.
Alexandra Healey