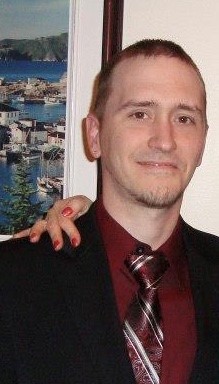 With deep sadness, we announce the sudden passing of Robert Stuart Jamieson, age 43, of St. John’s. Robbie was predeceased by his grandparents, Edward and Joan Jamieson and Gilbert and Kathleen Kielley, his Uncles Bill Jamieson and Gil Kielley and cousin Todd Kielley. He will be dearly missed by his mother Barbara, St. John’s, and father Edward, Cupids; brother Ted (Vicki) Edmonton, AB; sisters Andrea (Jason), Toronto, ON, and Sarah (Kyle), Peterborough, ON; as well as his nieces Linda and Maeve, nephews Jaeden, Marc and Finnigan, Uncle Jim (Cheryl), Aunts Bernice, Debbie and Rose, and many cousins, particularly Chris Kielley and Steve Jamieson.

We would like to express gratitude to all that have supported him over the years, especially Tania Fowler.  In lieu of flowers, donations can be made to the Heart and Stroke Foundation of Canada in Robbie’s memory.

May the roads rise up to meet you,

May the wind be always at your back,

May the sunshine warm upon your face,

May the rains fall soft upon fields

And until we meet again

May God hold you in the palm of his hand.

Barb, Ed and family I’m very sorry for your loss. May he Rest In Peace.

Barbara and family,
I am so sorry and saddened to hear of Robbie’s passing, and at such a young age. My sincere condolences to all of you. May God’s peace and love go out to you at this time and may Robbie rest in peace.

To Robb’s family and friends,
I haven’t seen Robb since high school however, I will always remember his kindness! My condolences to you all! RIP Robb ????????

Ed,ward, Barbara and Family
So sad to hear of Robbie’s passing . Keeping you all in our thoughts and prayers at this difficult time… Sincere condolences to you and all your family…

Ed , Bard And Family
So very sorry to hear of the passing of your son Robb
My Condolences to you all
RIP Beautiful. Boy
Sending much love

You will be missed Robb. I hope you can finally settle down. My condolences go out to the Jamieson family..

I remember well the times our families had together as kids. There were many fun gatherings.

The roads we all walk are scattered with highs and lows, challenges and joys of all sizes. Thinking of you all now, at this time, and wishing for peace in your hearts.

Dear Barb and Eddie, (old friends we haven’t seen for years),
Heartbroken to see the news of Robbie’s death. There are no words to comfort you on the loss of a wonderful son, who has been taken from you at such a young age. We are thinking about you both and saying lots of prayers that you may find some peace during this very difficult time.

So sorry for your loss, knew Robbie in his younger years, God bless

Deepest condolences to Rob’s family & friends. Met him a few years back, he always had a smile and was very nice and respectful. May he rest in eternal peace. Gone too soon.

I met Robbie the first day of grade one. I knew I wanted to be friends because he had a Star Wars lunchbox. ????
He was my first friend in a new school. He was always sweet and kind to me. Although I haven’t seen him in years I am deeply saddened to hear of his passing. His soul was bright and I’m sure is leaving a large void in the lives of those who knew him. Condolences to his family and loved ones.

Barb, Ed and family, we are very sorry to hear of Robb’s passing. We will keep you in our thoughts and prayers as you navigate your way through this sad time.
Gerry and Janet Crocker

I always remember Robbie as the little kid who wanted to play spotlight with us and who always had a big smile.

I am so sorry for your loss.

Barb and Ed….. So sorry to hear of Robert’s passing. It seems so unfair to go at such a young age. Bless you all

Barbie, Ed and all the family, we are heart-broken about the loss of your son and brother Robbie. Please know that you are in our thoughts and prayers at this sorrowful time. May you be comforted with happy memories of him. Rest in peace, Robbie.
Your cousins, Mary, Mike, and Bernie Kavanagh

To Ed,Barbara and your family,
I offer my sincere condolences on the loss of your son Robert. May his soul RIP.

Eddie , Barb and the Jamieson family we are deeply saddened to hear about the loss of your son . Our thoughts and prayers are with you all!

Barb, Ed and family::
So saddened to hear of Robbie’s passing. I didn’t know Robbie as an adult but as a young child he was a sweet kid that was gentle and loving. Our condolences and prayers to you.
Ed and Maryalice

My deepest condolences to the Jamieson family. You are in my thoughts and prayers during this difficult time. May you find comfort in knowing his soul is forever at peace.

Robb will live forever in our hearts and memories. My deepest condolences to you all.
Joanne and Javier

To the Jamieson family,
My deepest sympathies to you all at this difficult time. Robbie was a smart, caring and funny guy. He will be greatly missed.

Deepest condolences to all of you during this very hard time. On behalf of all the Kashyap family.

To the Jamieson family,,
You are in our thoughts. Robbie was a sweet guy. So sad.

Barbara and family, you are in our thoughts and prayers at this difficult time. God bless you all. Bob and Kay Connors

Ed Barbara and family please accept my sincere condolence . May his soul rest in God’s peace and love.

Condolences to Barbara and Family on the
passing of your son Robb. May he RIP
God Bless.

My deepest condolences to Ed, Barbara and all the family. May his soul rest in peace.

My deepest condolences to Robb’s family and friends. Caring sweet man that would have the most wonderful chats with me about life..Gone but never forgotten.. My friend rest easy until we meet again. John JR Robinson.

Wishing you peace, Robb. May your family and friends take comfort in your loving memories.

Condolences go out to the family, May u forever RIP Robb, see ya on the other side